I drove over to Wilderstead last night, arriving just before dusk (about 8:45 p.m.). I settled in for the night, intending to be up early to do spring chores this morning. After full dark, I took a little walk outside. It was a beautiful night. The air was cool, but with my fleece on, I felt fine. Great camping weather. And the moon! It was so bright, it was casting amazing shadows. I could almost read by it. So of course, I launched into singing Night Rider's Lament to the woods:

Last night, while I was out ridin'
the graveyard shift midnight till dawn,
the moon was as bright as a reading light
for a letter from an old friend back home.

It was unearthly beautiful. I almost didn't want to go inside. But I built a cozy fire in the wood-burning stove and settled in to write Sunday's sermon. I went to bed late, thinking I'd sleep in. But with the light streaming in through the skylights, I was up bright and early at 7:45 a.m.

The dew was pretty wet, so I decided to be lazy for a while before trying to get anything done. No digging today (the ditches had standing water in parts of them). But about 10:00, I went out to work on the trails. The ground cover wasn't high enough to mow down yet, but with my hand sickle I cut back all the stickery bushes that send out their tendrils over the paths. After that, I got a bucket and started treating the ash trees to keep the emerald ash borer at bay.

Every tree took a specific dose of medicine, which had to be mixed with water, and every tree's bucketful had to be hauled out of the creek, which was a lot of fetching and carrying, as well negotiating the creek bank twice each trip. The last couple of trees, I took the water from the footer ditches.

There were three large frogs in residence in the ditch. One disappeared as soon as I showed up and didn't reappear. One dived for cover, but came back up only to disappear on my return. Then there was this fellow, who jumped in the water, but kept a lookout all the time. Brave frog. Must be an enchanted prince. 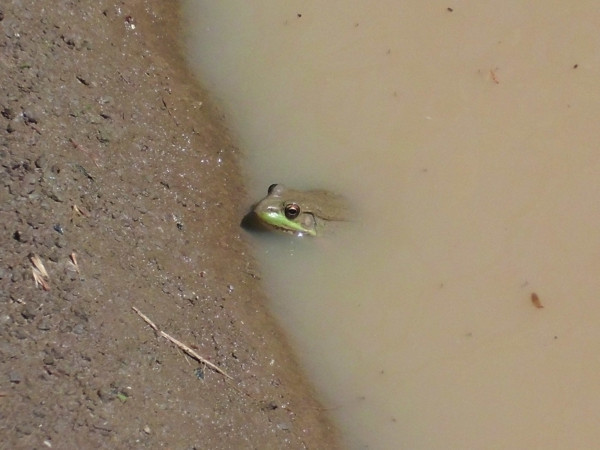 The morning was absolutely gorgeous. Like the most beautiful morning in the woods since the beginning of the world. I was so overwhelmed with it. Then as I was preparing to leave, I realized it was May Day -- the official beginning of summer in Merrie Olde England. So as I drove off, I put in my CD of Folk Songs of England, and joined in singing,

Robin Hood and Little John
have both gone to the fair-o,
We'll go to the merry green wood
to hunt the buck and hare-o.