Let not many of you of you become teachers, my brethren, for you know that we who teach shall be judged with greater strictness. For we all make many mistakes . . .

Years ago, as we were preparing to elect delegates to General and Jurisdictional Conference, news came that two of the leading candidates – a District Superintendent and the Bishop’s Assistant – had both resigned their orders and left the ministry upon it being revealed that they were having a sexual affair with each other. The husband of the Superintendent is apparently the one who blew the whistle on their behavior. And say what you will about Bishop Woodie White, he had no patience with adulterous ministers: they were both gone before you could say "Jack Robinson."

This left their many friends and colleagues to gape and ask each other how in the world this had come to pass. At the same time, there was quite a bit of worry expressed over how this would be received among the churches in the Conference. The prevailing view was that the ordinary layperson would simply be condemnatory and that the end result of these two persons' transgression would be a lot of nasty things said about the clergy in general.

Well, in the midst of all this, my Lay Member of Annual Conference – a woman from a small, conservative church in the depths of Pike County – gave the most mature, most spiritual summing-up of the whole mess that I heard from anybody. With a rueful grin, she looked at me sideways and said, “That ol’ sin – it’ll get ya.”

Yeah, it will. But it leaves me wondering – and this is what I want to talk about this morning – how people who know better wind up blundering into some of the predicaments they eventually find themselves in. And it’s not just ministers, not just religious leaders who wind up committing the very sins they preach against. What shall we say about lawyers who break the law? Or doctors who wind up addicted to drugs or who take life and death decisions out of the hands of their patients? Or police, or politicians, or any of those we look to for leadership in the world of government? How is it that leaders go wrong? And what about the rest of us?

Well, as I have pondered this over the years, there’s a recurrent image that I’ve carried in my head that helps me understand it. It goes back to my first reading of The Hound of the Baskervilles when I was in about 5th grade.

The villain who runs the ghostly hound – actually a normal, if very large dog, painted about the mouth with phosphorescent paint – has him kenneled on a lonely island in the midst of the Grimpen Mire. The Grimpen Mire is a bog, a treacherous place where one wrong step can land you in a sucking slime that you can’t get out of – and without help, you will eventually exhaust yourself trying to escape and drown.

People wisely avoid the Mire, which is why the island in its midst is unvisited. But the villain, who is posing as a naturalist, has scoped out all its ways, and he can walk there without fear. In fact, the reason that the villain can safely cross the Mire when others dare not is that he and his wife have planted little wands here and there, showing the firm ground for those with eyes to see, and thus give a path across the Mire to the old tin mine in the middle where he keeps his hound. In the last, climactic night, though, in which he has to flee upon Holmes shooting his hound, there is a fog over the mire, and he can’t see the little wands. And so he disappears, never to be seen again – a victim himself of the Mire.

Well, I take this as a parable of the problem all of us have. Life is full of traps, places where it’s easy to make a mistake that may cost you all you have. And none of our problems are so dangerous as the moral dilemmas that we face. We ought to know better, but somehow we don’t. Or as my former parishioner put it, “That ol’ sin – it’ll get ya.”

And this can happen to any of us, but some of us have the job of helping to conduct others through the Mire. The clergy teach about sin and righteousness; lawyers advise people about legality; doctors help people make decisions about their health and medical care; police keep us safe from bad guys; parents do all this and more. And because we have been in and through the Mire with all kinds of people and have the wisdom of all that experience – and because many of us in our own way have received special education and training for our task – we are used to crossing the Mire safely as we assist others.

But you can get to where you think you don’t need those little guide wands any more. Those other people do, because they don’t know what you know, haven’t spent their lives doing what you do, but you – oh, you discern the pattern. You think you can see where short cuts can occasionally be made. You don’t always need the little wands to guide you. You know the Mire so well, you can cross it even in the dark and the fog.

And you know what happens when you do that? The preacher winds up doing things he knows are wrong, but thinks that because he’s always offering grace to others, he can presume upon it for himself. The lawyer, whose duty is to make the best argument he can for his client, comes to believe that he can make something legal just by means of his own cleverness. The doctor becomes like Dr. Endymion Leer, the villain of Hope Mirrlees’ novel, Lud-in-the-Mist, who has the habit of waggling his fingers in front of himself and saying, “Life and death! Life and death! These are the dyes in which I work. Are my hands stained?”

The fact is, nobody is any smarter, morally, than anybody else. All of us need the markers that God has laid down, and none of us are so wise that we can say that we discern the hidden pattern and can guide ourselves. No matter how many times I have walked with someone through that person’s shame or bewilderment, I have my own soul to save, my own honor to maintain. I cannot dispense with the givens of sin and righteousness, nor am I at liberty to just make up new ones to please myself.

Good and evil have not changed since yesteryear, as Aragorn said, nor are they one thing for you and another for someone else. A little humility is called for, an admission that no matter how much I have helped others, I need the same help to get me where I need to go. ‘Cause that ol sin – it’ll get ya. I don’t care who you are.

Now, at first, when I look at that, I think, No. That would be like the priest that walked by the man waylaid by thieves, for if he were dead, then touching him would make the priest unclean. The Old Testament priest and the Brahmin of India are both “holy men” whose first concern is their own holiness, but that holiness doesn’t make much difference in the lives of the suffering people around them. If that’s what you’re serving up, saying that the greatest need of the congregation is the pastor’s holiness, then I’ll take vanilla. But then I remember something else.

About the same time as the story I started this sermon with, I had a new troop of Boy Scouts at my other church, and I took them to summer camp for the first time. I had just three Scouts with me; the others couldn’t make it. But there we were, taking the tour of camp, and learning what was where and when things happened. They were like eager puppies, jumping up and down in my face, asking me questions, clamoring for my attention, my guidance.

Will we do this? When do we do that? What’s that for? Will we have time this week for thus and so? They were so eager, so excited. And I was the magic man who had all the answers. They knew that whatever they asked, I could tell them. They trusted me completely to guide them through this new experience.

In fact, so total was their confidence in me that it gave me the willies. I mean, they would have walked off a cliff if I’d told them to. (Come on. It’ll be fun!) And I thought, Nobody should have that much influence over another person. But love is like that, and there is no doubt that they loved me, they believed in me.

That night, after I finally got them to calm down and go to bed, I lay in my bunk for a long, long time, wide awake. O Lord, I prayed. Never let me disappoint these boys. Never let me lead them astray or let them down. And then I prayed for each one of them, by name. And then I prayed for each one left behind, who couldn’t make this camp. And finally, then, I could sleep.

That became my practice for the rest of my time as their Scoutmaster. I have kept it up ever since, whenever I take Scouts or Venturers or church youth somewhere. First, I pray that I may never, ever let these kids down. And if I’ve got something chewing on me that might get in the way of that, I make sure to offer that to God for him to deal with. “For we all make many mistakes,” as James says, and I’m no different. Then I pray for each one who’s along on this trip. And then I pray for those who couldn’t make this trip. And then, finally, I can sleep.

So, yeah, the greatest need of my congregation is my own holiness – but not because I’m so holy, or because it’s somehow more valuable for me to indulge myself in religious exercises instead of helping others. It’s because real holiness comes from the humility of knowing how easy it is to miss the guide wands – of knowing how easy it is to assume that you know what you’re doing – and so put a foot terribly wrong.

And the same is true of every one of us, followers as well as leaders. The only right and safe way to walk through life is with head bowed in humility, making sure you stay on the right path. Only thus will you be able to truly help someone else, for if you get off the path, you may lead that person off with you – and then you’re both trapped. 'Cause that ol’ sin – it’ll get ya. But it doesn’t have to, for Christ not only forgives sin, but can deliver us from it.

Thanks be to God, and may he keep us this day without sin. Amen.

Venturing Crew 119 is pleased to announce that Seth Sears received his Eagle in a special Court of Honor this afternoon at Ellettsville First United Methodist Church. Congratulations, Seth: Fly high! 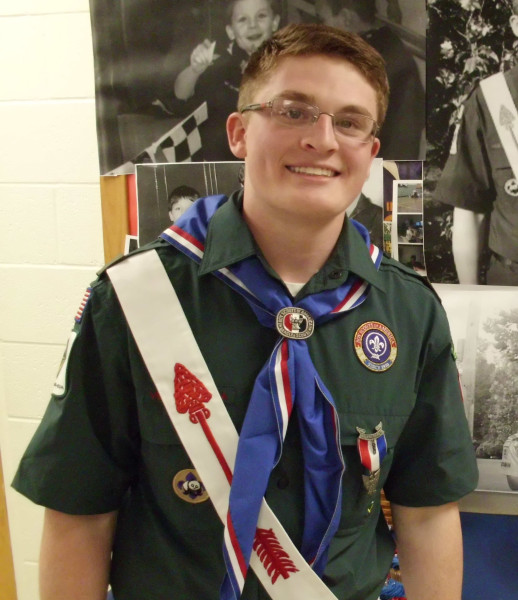