Conservatives (many of them) hate the Common Core national educational standards. But before they hated them, they were all for them. Jeb Bush, as a very conservative governor with an interest in education, was all for them -- and still mostly is. He hasn't changed; the movement has. What happened?

Back to the thing I keep harping on: the curricular question is, "What knowledge is of most worth?" A generation ago, conservatives were beating the drum on the dumbing down of curricular standards. What Do Our 17-Year-Olds Know? by Diane Ravitch and Chester Finn was published in 1987. It was a searing indictment of the low standards of literacy and historical knowledge that our schools had transmitted to our young people. Liberals assailed Ravitch and Finn as elitists, but they were arguing that the schools had been hijacked by those who cultivated knowledge of minor worth but great ideological weight. So the grandfather of the Common Core movement was the school reform movement of the 1980s.

Eventually, a consensus was reached that standards had to be improved. But what happened then is that the Usual Suspects -- the same education gurus who gave us the low standards Ravitch and Finn complained of -- gained control of the process. What finally came out as Common Core may be stronger on facts, but the choice of facts to be included -- the answer to the curricular question, "what knowledge is of most worth" -- was firmly in the control of the left-wing ideologues that the school reformers had set out to replace.

It was quite a jiu-jitsu move, but then the Usual Suspects are good at this sort of thing. I've posted before about how I was admitted to the School of Education at ISU at the high tide of school reform, only to see the program I graduated in redefined as unavailable to people like me by the time I left. And all the new Reform! manifestos were being written BY the people they had originally been written AGAINST. Meet the new boss, same as the old boss.

This explains the revolt against Common Core. The conservatives and the liberals have different answers to the question, "what knowledge is of most worth," and the fight is not about how tough the standards should be, but whose values they should reflect. Complicating the argument is the contribution of business interests, whose idea of what should be included is different yet again from those of the traditional conservatives and liberals. Business wants high standards, and thinks that they should be measurable so you can see what you're paying for. Which is great, but they tend also to believe in "experts," and most of the "experts" are among the Usual Suspects, so the business leaders mostly back what the liberals come up with and conservatives feel sold out by people they thought were their allies.

Anna brought the grandcubs down for a couple of days. With cold weather rapidly passing, it was time for little boy haircuts. I made an appointment with Julie at the salon and we repaired thither this morning.

Daniel is an old hand at this sort of thing, his Daddy having taken him with him to the all-male environment of a barber shop before. He knows the drill, and was patient and cooperative. James was an altogether different story. He wouldn't sit by himself, he wouldn't wear a cape, he started out in Grandbear's lap, then moved to Mommy's. There was hair everywhere by the time we were done, but Julie was not to be denied. Ready when you are
Daniel was at his most grown-up Lookin' sharp
Finely chiseled features emerge from beneath the mop 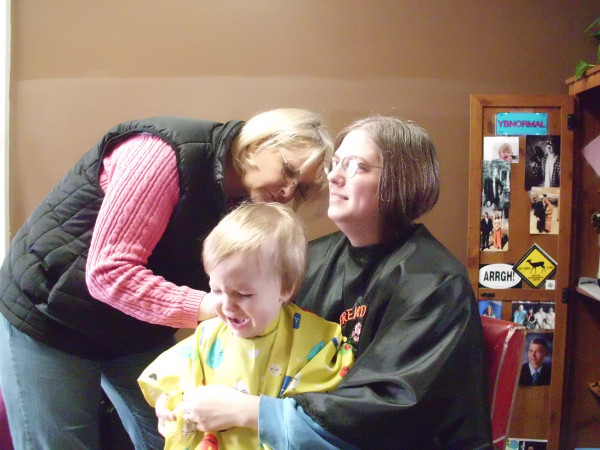 Is outrage!
Brothers can be very different 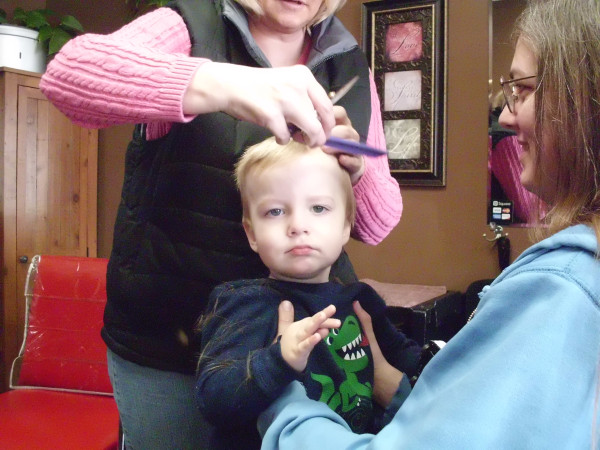 After their haircuts, Deanne joined us and we adjourned to the Cloverleaf for lunch. Daniel had had a low fever when he got up this morning, and he started to feel cold in the restaurant. He had no appetite. Once we got him home, he crashed on the couch. James may go down for a nap soon (we hope). But at least they're groomed and ready for spring.
Collapse