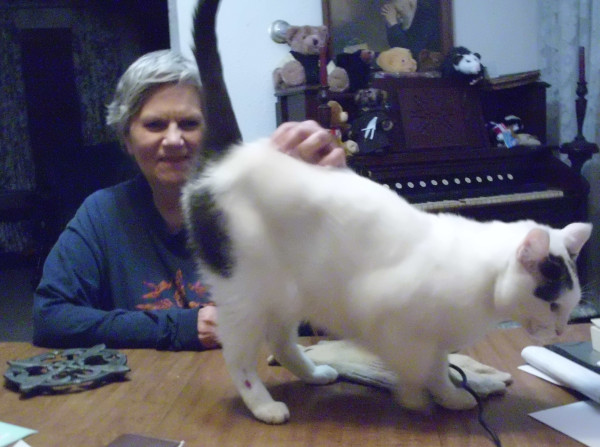 Does this make my butt look big?
No, it just makes your brain look small.

I was moaning about the condition of things in the country, in the world, in the Church. Deanne said, "Do you think we're living in the End Times?"

"No," I replied. Not that I don't believe in the return of Christ; in fact, I would be better pleased if I thought that were imminent. But I think we're entering a new Dark Age. How long it will last is anybody's guess, but wishful thinking won't make it pass on any sooner. And those of us nearing the end of our active careers are least able to adapt and lead into the new age.

Fighting the long defeat, as Galadriel put it, though without a home base that is truly home to defend. No, I don't see us as hunkering down somewhere and creating a memory of the world we have lost, a spiritual or political Lothlorien; rather, I foresee rearguard actions, betrayals, disappointments, loss upon loss.

At this point, I'm not fighting for myself at all. I just want my children -- or at least, my grandchildren -- to inherit something of what I have to give them, of what I knew and inherited from my parents and from the saints and sages of the past. For that is what is at stake, and it's about more than who runs the world or even if real Christians are forced into hiding by apostates. The agenda of the Lefty-loonies is as much a violent overthrow of the past as anything the Islamic fundies are up to. The bearded brigands smash ancient statues; our post-modern pan-sexual terrorists would forbid anyone to think in categories that have channeled the mind of Man for ten thousand years: love poetry, narratives, pop songs, religions, psychology, sociology, law, art, history -- everything that does not explicitly proclaim their ideology in approved form for posting as a meme -- all that is doomed to go.

In talking with Deanne over my sense of loss, I suddenly thought of C.S. Lewis's image of the Atlantean exile, facing life after the whelming amidst those who could not possibly share what he had known:

The Last of the Wine

You think if we sigh, drinking the last decanter,
Were sensual topers, and thence you are ready to prose
And read your lecture. Need you? Why should you banter
Or badger us? Better imagine it thus; suppose

A man to have come from Atlantis eastward sailing --
Lemuria has fallen in the fury of a tidal wave,
The cities are drowned, the pitiless all-prevailing
Inhuman sea is Numinor's salt grave.

To Europe he comes from Lemuria, saved from the wreck
Of the gilded, loftily builded, countless fleet
With the violet sails. A phial hangs from his neck,
Holding the last of a golden cordial, subtle and sweet.

Unnamed is Europe, untamed; wet desolation
Of unwelcoming woods, the elk, the mammoth and the bear,
The fen and the forest. Men of a barbarous nation
On the sand in a circle standing await him there.

Horribly ridged are their foreheads. Weapons of bone,
Unhandy and blunt, they brandish in their clumsy grips.
Their females set up a screaming, their bagpipes drone;
They gaze and mumble. He raises the flask to his lips.

It brings to his mind the strings, the flutes, the tabors,
How he drank with poets at the banquet, robed and crowned,
He recalls the pillared halls carved with the labours
Of curious masters, (Lemuria's cities lie drowned),

The festal nights; the jest that flashed for a second
Light as a bubble, bright with a thousand years
Of nurture; the honour and virtue, the grace unreckoned
That sat like a robe on the Atlantean peers.

It has made him remember ladies, proud glances,
Fearless and peerless beauty, flower-like hair,
Ruses and mockery, the music of grave dances
(Where musicians played, huge fishes goggle and stare).

He sighs, like us; then rises and turns to meet
Those naked men. Will they make him their spoil and prey
Or salute him as god and brutally fawn at his feet?
And which would be worse? He pitches the phial away.