I was putting laundry away and found someone already occupying a shelf of bath towels. She looks kind of annoyed, too -- perhaps from the camera's flash. 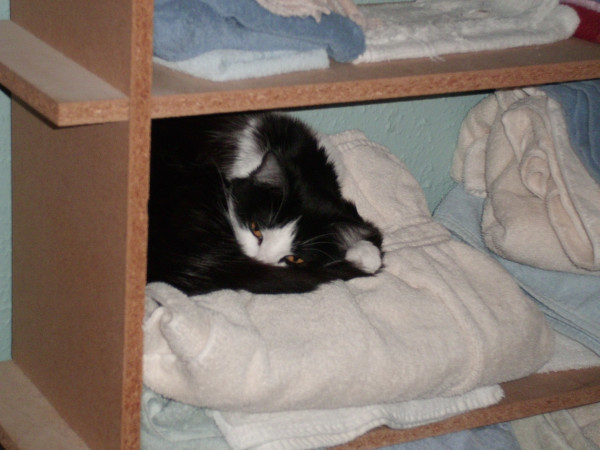 Snoozy cat
Why are you taking pictures of me? Don't you have anything better to do?

Hera is our Miracle Cat, currently on at least her third life. Just as we were getting ready to have her put to sleep a couple weeks ago, she started showing improvement. She's still thin and all, but she's grooming herself, she's eating without throwing up, she's even pooping some. And she's still active and playful, though she can only take so much from Lightning. Thanks for all your prayers for her.

Just prior to Jonah's book, I read The English Reformation, by A.G. Dickens. Good read. Very dense. Gave a good read on Tudor England and the opinions of ordinary folks. We tend to see Henry VIII's reforms (and power grabs) in the light of subsequent passions and factions, whether those of Elizabeth's Reformation or the subsequent English Civil War and Glorious Revolution, which set up the world we know today.

Meanwhile, several books came today from Amazon. I did a quick run-through of a highly technical one: A Gateway to Sindarin, by David Salo. Salo is a doctoral candidate in linguistics; he advised Peter Jackson's cast for the LOTR movies on how to pronounce Sindarin. I'm glad to know that I mostly guessed correctly how to do it when I was in Junior High, although mastering the rules which give you MorANnon and DaGORlad and BELfalas is tricky for me. I've been thinking they should be MORannon, DAGorlad, and BelFALas all these years.

Also getting started on The Word at War: World War Two in 100 Phrases, by Philip Gooden and Peter Lewis. Still to come: Barbara Hambly's latest vampire spy novel, The Kindred of Darkness. And there are still more books I'm expecting to show up any day now.
Collapse