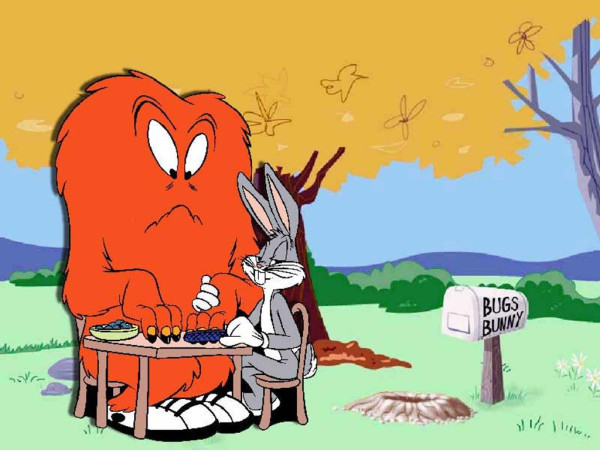 BTW, did you know the name of the monster in this cartoon is Gossamer? 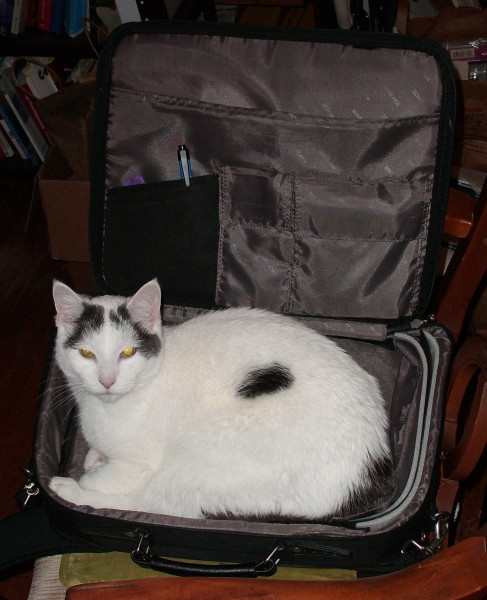 I finally got out to the holler today. I've been postponing it for a couple-three weeks, as more and more must-dos kept raining on me. Meetings (some of them sudden and unplanned for ahead of time), people I needed to chase down, projects that wouldn't get finished -- all the usual. This morning, I was beyond frustrated: I was angry. If I didn't get out of town, I felt like I was going to hurt somebody. (Well, I wouldn't really, but I was to the point where I didn't trust myself to watch what might pop out of my mouth, and meanwhile, my neck felt like someone had done an adjustment on it with a pipe wrench.)

So, I drove over to Wilderstead. Got there just before noon. I read a bit, ate lunch, went for a walk. Looking back down the holler from the paw-paw grove, I saw the cabin. It made a lovely picture. 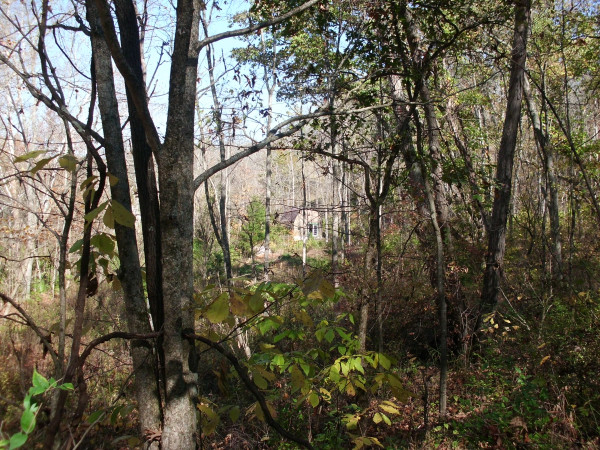 Little cabin in the woods

After that, I got my tractor out to go for a spin. It's sat too long, I thought; and indeed, it was hard to get it started. But I finally did, and drove up to the top of Akes Hills Road. Just outside my gate I realized that my right rear tire was flat. I aired it up when I got back to the cabin, but the valve in the stem is broken, so it's going to go slowly flat again. Gotta look up my tractor repair neighbor next time I go out there. *Sigh*

I then got to work on those downed trees over the creek. I got most of the limbs cleared away. The stream will carry the brush away in the spring. You can cross the Pishon now on a natural double bridge, but -- there are no handrails. I wouldn't recommend using the downed trees as a footbridge, especially not if they're wet. But at least you can see the creek clearly. And maybe if the trees' roots stay lodged in the bank, it'll keep the stream from cutting that way too much. We'll see. 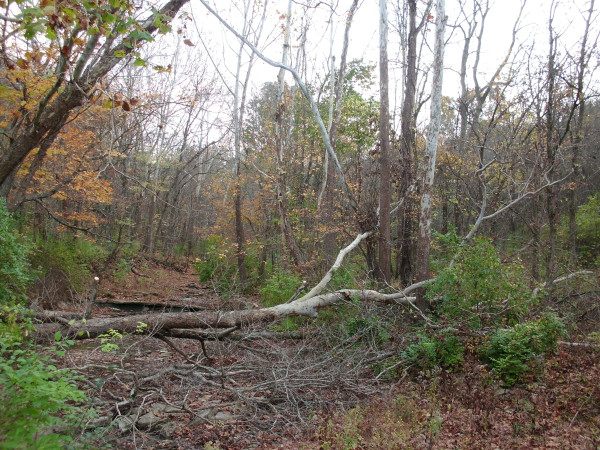 By then it was after three o'clock. I took the rest of the afternoon off and finished re-reading Murder Must Advertise, by Dorothy Sayers. I cleaned everything up, locked the place up tight, and was on my way home shortly after six. Upon arriving home, I got down to work and quickly finished the project that had driven me crazy till past midnight last night. I'm tired, but much more at peace with things. Gotta do this more often. Even if it means dumping things where they lie.

That comes hard for me. I was raised to be a driven man. My parents were always on my case about lollygagging around. Get your stuff done, then reward yourself with some recreation, was their attitude, and I absorbed it. But recreation isn't a reward, it's a necessity. I look back over the quality of my work the last week or so, and I can't say it's been much to brag about. If I'd taken some time last week, it might have been better (though I don't know when I could have gotten away). Still, I need to take regular days off, where I can get out of Dodge. I also need to learn to say No to some of the things that people ask me to do. It's a hard lesson to learn after forty years of banging away until you drop from exhaustion.