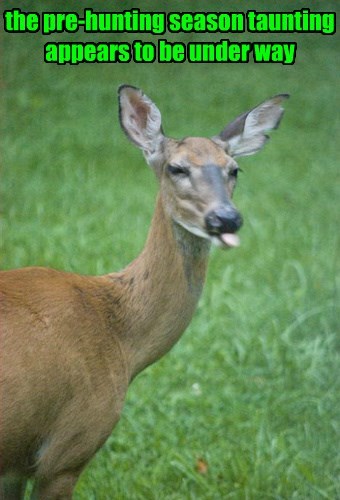 Your time is coming, Venison!

Some years ago, I posed the following question to an Eastern Orthodox friend on LiveJournal.

Suppose I were an Anglo-Saxon priest in some village in England in the reign of Edward the Confessor. I preach on Sundays, I celebrate the Eucharist, I baptize and marry and bury and catechize. I serve Christ as I have my whole life. If I am in correspondence with clergymen in faraway lands -- Greece, let us say, or Kiev -- that is not that unusual. We are never likely to meet, but if we do, we can take communion in each other's churches and serve at each other's altars. Now, there comes a day when news arrives from far away. The Pope of Rome and the Patriarch of Constantinople have mutually excommunicated each other and all their followers.

The question: What difference does this make, actually? Two faraway leaders, their guy and our guy, have broken relationships. It's happened before, and it'll happen again. Probably get fixed up in a few years (the fact that it hasn't yet and it's been over a thousand years since 1054 is more amazing than the fact that it happened back then).

Oh, you say, there are disagreements. Yes, but there were disagreements before, and they didn't impede our unity. Our side says they're out. Well, yay for our side, but I'm not sure what's changed, really. I'm still doing what I've always done. I'm still teaching what I've always taught. My relationships are as they have always been. The same goes for that guy over there. I don't feel out, even if his leader says I am; I don't feel that he's out, even if my leader says he is. What would hinder our correspondence, at least during our lifetimes? What has changed?

This is not to minimize the differences, doctrinal or practical, that stand in the way of Catholic and Orthodox unity. It's just to point out that those differences were tolerated for a very long time, and certainly, I (as a hypothetical Anglo-Saxon priest) haven't done anything to make them worse, nor has my colleague over yonder.

I was thinking of this again as I prepare to attend our NAUMS Chapter's annual meeting tomorrow. Last year, GCUMM officially (by their lights) read NAUMS out of the UM family; NAUMS has refused to recognize their excommunication. We here in Indiana were engaged in putting together a mission trip to Africa, in which NAUMS members were actively supporting the official Conference Scouting leadership. Suddenly, when it came time to dedicate the team, our Conference Scouting Coordinator told us that he couldn't take part in the dedication because this was a "NAUMS project." Our Chapter president eventually talked the Conference Coordinator into participating in blessing his own project, but said Coordinator laid down the condition that NAUMS couldn't be mentioned, nor any NAUMS banners or anything be displayed.

We were flabbergasted. We were doing this in support of his objectives, and he'd been in on it from the beginning. Not only that, but all of us who were part of NAUMS were also leaders in the Conference and in Scouting ministry through the Conference or Districts or local churches. Call us what you will, we're the same guys who've done this ministry with each other for years. What has suddenly made us glow green with nuclear fallout? And why would you drop us just as we're getting ready to go do this major trip on your behalf? This isn't just petty, it's stupid. What has changed between this group of Indiana UM Scouters and that group? Just because a bunch of people in Nashville, Tennessee, can't get along, why should that get in the way of what we're doing up here in Indiana (or far away in North Katanga)?

We NAUMS folk have been in conversation with the powers that be in the Annual Conference. Maybe we'll be welcomed again, maybe we'll have rocks thrown at us. I don't really care. There's really nobody else up here doing anything to speak to or from the Scouting ministry community, no other real focus for people's desire to do something for Christ in this area. Whether NAUMS sinks or swims, whether the Conference gets its act together or not, there's just us, and we'll be here doing what we do; after all, God called us to do it.

In the meantime, we are following the example of Christ, who a bruised reed would not break, nor a dimly burning wick extinguish. We refuse to make a choice that has been forced upon us by buttheads who can't figure out how to get along together. We do not intend to dump our association with NAUMS, which deserves better of UMs than GCUMM has done. Meanwhile, as members of the Indiana Annual Conference, we belong, too, and our loyalty to the Conference is not to be questioned. We are who we have always been, and we will continue to do ministry in company with our brothers and sisters in Christ who have been called to the same ministry we are engaged in. We will maintain the unity of the spirit in the bond of peace; let others do differently, if they feel they must.
Collapse