Our happy Crew toodled over to Camp Beaumont outside St. Louis for the big Fall Fun Rally hosted by the Greater St. Louis Area Council. Representing Crew 119 were three of our girls: Abby, our Vice-President and Leader for this trip; Dakota; Hannah, our newest Venturer. We fought out way through interstate road work and such and arrive just after dark on Friday night. Abby and Mama Julie went to the leaders' meeting while the other three of us set up camp. We made an early night of it.

Saturday was a beautiful day and there was lots of fun to be had. We toured the re-enactors from many periods. Trappers were selling furs and fur pieces, there were lots of handmade souvenirs (I got a wooden cutlass sized just right for a certain pirate), even homemade soft drinks. The ladies hit the shotgun range, then we trudged over to the rifle range. BSA rules for Venturers are more expansive than for Boy Scouts. We got to shoot a paintball gun, a .22 rifle with a magazine, a .22 revolver, and an AR-15 firing .223 NATO rounds. After supper, there were chapel services and lots of social events. We were up early this morning and had an easy run back to E-ville. 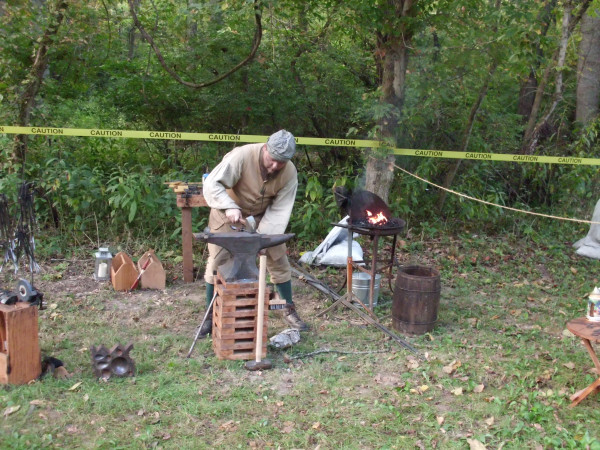 The smith, a mighty man is he
The re-enactors were interesting and fun 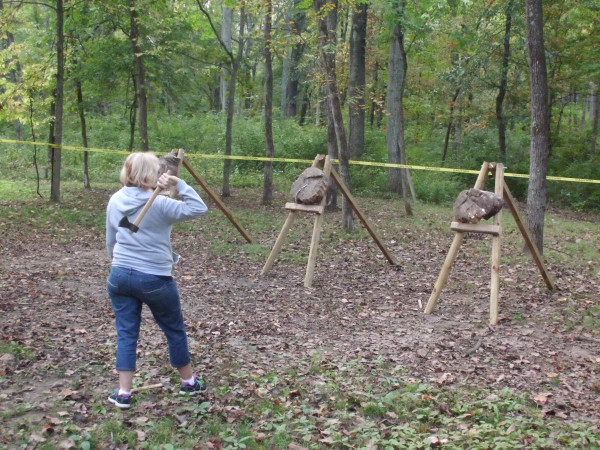 Gearing up
Hannah and Abby prepare to enter the firing line

"Is it your pleasure to go up or down [the river]?"

"Well, going up there's more riot but a better bottom; going down you're all right as far as the fork, and then you choose between thick mud and the Corporation dump."

"It appears to be altogether a choice of evils. But you have only to command. My ear is open like a greedy shark to catch the tunings of a voice divine."

"Great heavens! Where did you find that?"

"That, though you might not believe it, is the crashing conclusion of a sonnet by Keats. True, it is a youthful effort; but there are some things that even youth does not excuse."

In other news, we had a Saturday evening Protestant chapel service at the Fall Fun Rally designed, led, and preached by a Venturer, an 18-year-old college student intending to enter ordained ministry some day. I am loath to dissect his effort, partly as a consideration to his youth but partly also in solidarity with him as someone who puts himself in that position every week. I was never one to eat roast preacher for dinner after church. Besides, I remember my first sermon.

To be as fair as I can, he had some presence, and a degree of skill. He had done this before. And there was a sermon in his preaching that somehow managed to get out, although he kept getting in the way of it. Also, his hands needed to be duct-taped to his sides. But still, a reasonably good public performance. (I've had 13-year-olds preach for me on Scout Sunday who had more to say, though they did not speak as long.)

He also needed some tips on organizing a worship service, including in his selection of songs. The opening song (which I'm not sure if we were expected to sing along to or not) was a recording of "You'll Never Walk Alone." The original setting of this song was Rogers and Hammerstein's Carousel (1945). I'm guessing he stumbled across this song because it was performed at Obama's first inaugural; being from a different generation and with a rather wider acquaintance of popular culture, all I could see in my mind's eye was a stadium full of Liverpudlian soccer hooligans belting out the tune. It made for an odd Call to Worship.

But all this I could forgive, maybe even be as charitable as A.H., another Venturing leader from Wapehani District, who said to me as we were leaving chapel, "Well, he'll get better as he gets more experience." I replied something to the effect than when I go to church, I'd like to hear the name of Jesus -- just once. This young man may become more polished, but if he isn't talking about Christ, nor is the name of Christ to be invoked, he's not leading a Christian worship service, and I'd prefer as a leader somebody with less presence who shows that he has stood in The Presence.
Collapse