My sciatica was chewing on me this morning. Haven't had that much in a long time, but I've had several episodes recently. My whole body is tight as a drum. My brain is slow to the point of wallowing in quicksand. I can't get myself going, and I feel tired all the time no matter how much sleep I get. Hello Stress, my old companion.

I have lived with stress for most of my life. The ministerial career is full of stress. Being a pastor is like playing a sport with three or four playoff series a year. Right now, it's Charge Conference/Stewardship program/lots-of-meetings-gotta-get-things-going-hey-it's-SEPTEMBER-where-is-everybody. I'll get a breather about Thanksgiving, and then we'll descend into the Advent/Christmas Madness, followed by Check Day (annual reports) and other get-the-new-year-started stuff. Then another breather and the run-up to Holy Week begins. Another breather, and it's summer programs (Annual Conference, camps, and trips)! The best (least stressful) month of my year is probably August.

Some of this may be seasonal, as in the world outside rather than the world within. My wife and daughter both suffer from Seasonal Affective Disorder. We have a saying around here: February is the longest month of the year. As daylight wanes and temperatures drop, they start to go into hibernation mode. Even people who don't suffer from SAD, at least by any clinical diagnosis, can feel the emotional and physical effects of the change of seasons. Why should I be different?

And, of course, some of this may be situational. I am struggling with trying to get a house built, wrestling with factors of time, money, and lack of expertise. Deanne's pursuit of licensure goes on and on (and on). I worry over my children's situations. The congregation is doing okay, but is kind of flat these days; it may perk up as time goes on, but I'm not deriving much joy from the things I deal with right now -- much sowing and little reaping. I keep worrying over retirement, which looms on the horizon. And I fear for my country. So, there's lots of things to drag one down. It's hard work to stay "up" enough to get something done.

Now, all this is that I'm whinging on about comes and goes. And I've been here many times before. The kicker in all this is that it gets harder to pick yourself up and throw yourself at the challenges with each passing year. Bodily strength fades little by little, and with it, psychological suppleness. Still, I'm up and dressed and sitting in my office getting something done. The sick are visited, the paperwork gets processed, and I make it to the stuff on my calendar. In fact, I probably get a lot done, but I feel like I'm swimming through molasses while carrying a laden ox-cart on my back.

Nevertheless, there remaineth a rest for the people of God. 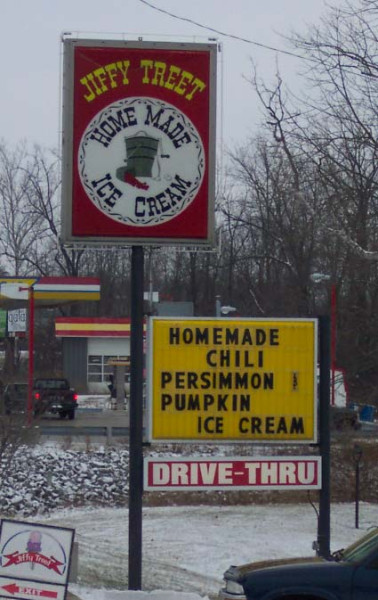 Throwback Thursday more like "Throw up Thursday." From c. 5 years ago in our fair town.
Collapse