There are three millenarian religious movements prominent in the world today. For those wondering what "millenarian" means, it refers to The Millennium, the thousand-year reign of Christ foretold in the Book of Revelation; by extension, it refers to all theologies which involve a Day of Judgment or a utopian rebirth of the world -- not as something that happens outside of time in heaven, but within time, in the material world. The Millennium is, literally, heaven on earth.

So, obviously, Christianity (and the Judaism from which it sprang) is millenarian. The Day of Resurrection is the focal point of biblical religion, the "blessed hope" of the Christian faith. Millennial fever -- the expectation of the immiment end of the world-as-it-is -- is something that breaks out over and over again through the centuries among Christians. But since Christians do not believe that they can hasten the coming of what the Bible calls "That Day," they can only prepare for it. Preparing for That Day means repenting of one's sin and living the life of the kingdom to come in the here and now. It also means inviting others to come to Christ before Christ comes to them (for when he comes again, it will be as Judge rather than Savior).

Islam also earnestly awaits a Day of Judgment. And there are varieties of Islam that invest heavily in the idea of that there is, somewhere out there, a "twelfth imam" of the sacred line of Muhammad, at whose revealing the Day will be at hand. Some Twelvers, as they are known, think they can hasten the day by violence. The followers of the Mahdi in the late Nineteenth Century that took over the Sudan (and killed Gen. Charles Gordon who defended Khartoum) were of this ilk; so are today's jihadists. I don't know all the ins and outs of Islamic eschatology, but to me, the obvious difference between the Christian and Muslim millenarians I've seen is simply that the Christians act on their expectation through piety while the Muslims act on theirs through violence.

And then there are the Progressives. Progressivism is a political ideology of course, but it functions as a religious faith for many people. David Horowitz, whose parents were old-style Communists and who himself founded the New Left in the '60s, came to change his beliefs in the '70s and '80s. He is now a prominent conservative intellectual. Looking back at the leftists he has known (and he's known 'em all), including himself, he makes the case that leftism is a religious movement. The prototype of revolution was the French revolution, of which Marxism is the modern interpretation. And all revolutionary ideologies -- all the formulations of the left -- look forward to a utopian state in the near future. Their faith in this is not shaken by all their past failures. They excommunicate those who come to doubt the coming of the new world, or who come to doubt the pure intentions of those who are doing whatever it takes to achieve it. For Progressives, the "just society" of whose blueprint they are the sacred custodians, is always just around the corner. Like the jihadists, they believe that this utopia can be hastened by their action. And while they may abhor violence in the abstract (no bloodshed, please), they are certainly willing to use power in all kinds of ways to achieve their ends.

All of which brings up a question I have wrestled with many times. Are followers of "progressive Christianity" really just garden variety Christians who also happen to have progressive political views, OR have they substituted their political ideology for orthodox theology?

For example, a conservative "straight axle" thinker on, say, gay marriage, will say, "God created Adam and Eve, not Adam and Steve" and think that trumps the board. He or she is not alert to the problem of quoting a religious authority in a pluralistic context; for why should someone who doesn't share your sense of biblical authority take your pronouncement as dispositive for his life? Meanwhile, a progressive "straight axle" thinker will say, "It's wrong to exclude people from things because of their sexual orientation; therefore, we should celebrate gay marriage and ordain practicing gay ministers, etc." But this confuses the language of civil rights within the larger society with the disciplinary language of a religious society; why can't the progressive see that?

Most of the time, it probably doesn't make a lot of difference. We know what we know, or what we think we know, and we conflate everything from whatever source into a single domain of knowledge and belief. But when the road narrows and the hills and curves begin and the storms make the going dangerous, the "straight axle" thinkers will tend to slide off the pavement.

In my interactions with my progressive colleagues, I have noticed that a lot of them seem incapable of differentiating between religious and political values. And the smug ones, who flatter themselves that they are the intellectuals, that they deal in facts, not ideology, often seem to be the least able to engage in differential thinking. And when you finally do get them to talk about God apart from politics, you realize that their conception of God isn't much like what you thought we all agreed to teach when we were ordained. For them, politics has replaced theology, and the only piety they know is to "immanentize the eschaton" by agitating for yet more government action.

Do conservatives do this? Yeah, some. I've met people who confused patriotism with piety. The difference is, most of them didn't have all the fancy degrees or claim to be deep thinkers. I also know a fair number of people with orthodox theological beliefs who advocate progressive political ideas. They are usually aware of the different domains in their heads, and whether or not I agree with them, I respect them for the process by which they arrive at their conclusions. But I also know a lot of ordained ideologues, whose only real faith seems to be in the coming "just society" and who think mere anti-Americanism or denunciation of corporations will pass for renouncing the devil. Since their political ideology has basically replaced traditional theology in their thinking, they're just heretics. 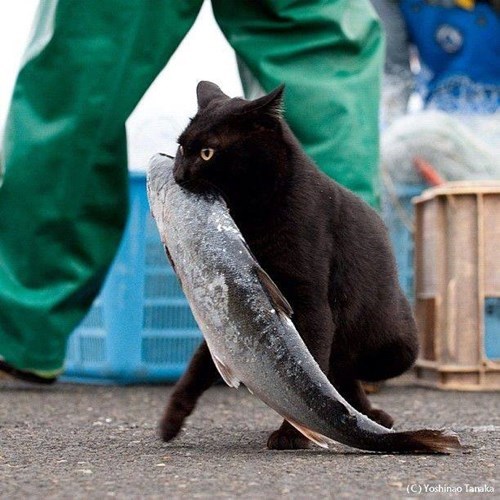 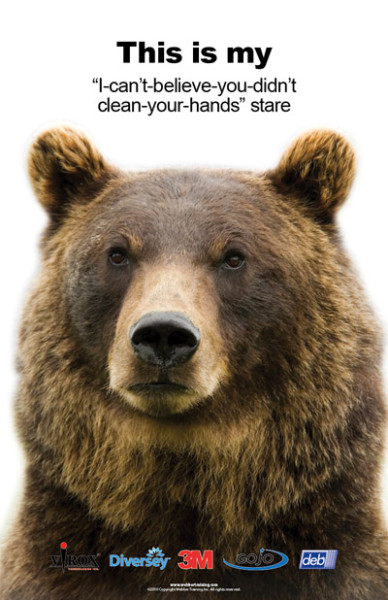 So, there I was, printing out ecology and health posters in English and French to be laminated for our camp in the Congo, when I stumbled over this pic I had downloaded some weeks ago and forgot I had.

Yeah, we all know about bears in the woods, but still.