I finally got out to the Earthly Paradise Sunday afternoon. The sun was slowly descending and after supper I had plenty of time to do some chores. There were some annoying humps in the building site that needed to be rough-leveled -- a hard thing to do by the shovelful. So I got the tractor out and scraped back and forth a bit, heaping up the dirt where it could be excavated easier. Then I started filling the wheelbarrow with dirt and carting it off, bit by bit.

I got that about half done and I was about half done, myself, so I turned my attention to dropping a dead tree that I thought was imperiling my storage shed. It was so tough to cut through that my chainsaw was smoking, so I probably could have just left it. But I got it down. Dropped it right where it had to fall, too.

Took a quick creek bath just as the light was fading and it was time for a quiet evening in the cabin. I was up early this morning and got to work before the day could heat up. Finished moving the dirt with shovel and barrow, then got out the tractor again and smoothed everything out. For good measure, I graded the ramp between the two retaining walls that provides the roadway into the upper hollow. 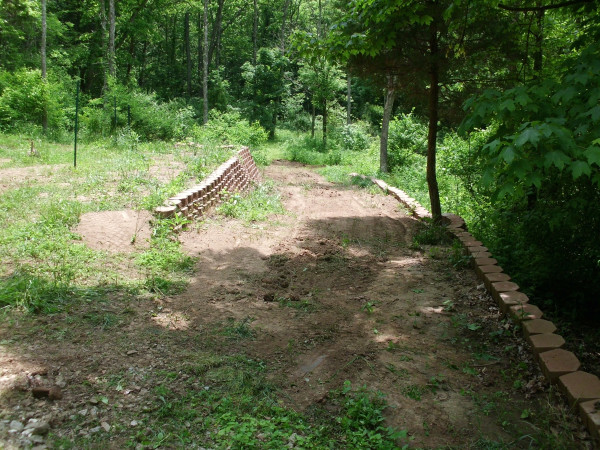 Every valley shall be exalted 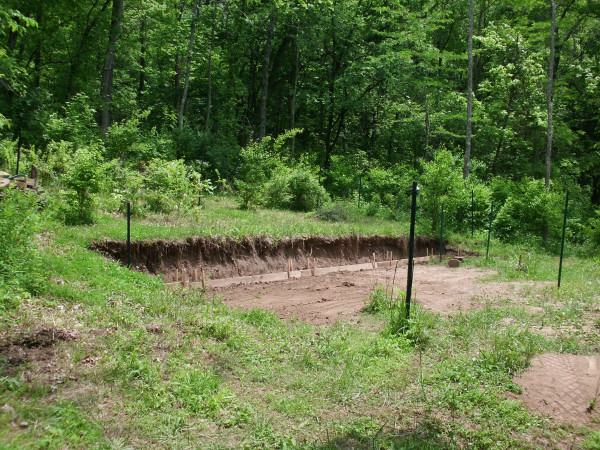 I then decided it was time to patch the barbed wire fence where it was damaged by the guy what drove through it last year. Some guy under the influence of who knows what managed to go off the road near the top of Akes Hill Rd. and crash into my upper pasture. It was quite a ride down to where the car came to a rest; they pay good money for tickets at King's Island for rides not half so exciting. Actually, I'm surprised that anybody walked away from the landing. The wheels were pancaked, among other damage to the underside of said car, so the driver called a wrecker. The wrecker couldn't get the car out the way it came in, so the wrecker driver CUT my fence in a second place to yank the car out.

Well, I pounded in three new fenceposts where the driver went through the fence and restrung the barbed wire. It's looking pretty good. At the lower break, I pounded in one new fencepost, but left the re-attachment for another day, since 1) the drop-off was very steep, and 2) this necessitated standing precariously amid a bed of really lush poison ivy, and 3) nobody is going to notice the missing wire as long as the hedges are all greened up. So I left that repair until late fall, when the poison ivy will have died away and I can get in there without fighting the underbrush.

Made lunch, then it was off to the bathing pool to wash off the dirt and urushiol. The evening before, I didn't see any fishies in the pool, but in the sun I saw lots of small fry there. 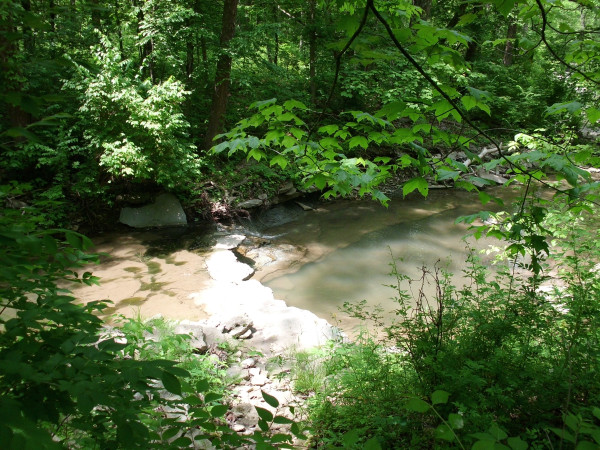 So, I cleaned up my various tools and packed up to come back to civilization (or whatever this is). Took a last long look at all my neatly mown trails. Why, this one could take you -- anywhere. A bonny path
And see ye not that bonnie road,
Which winds about the ferny brae?
That is the road to fair Elfland
Where thou and I this night maun gae.
Collapse