Al Gore has said that those who deny his version of climate change must be made to pay a price for doing so. He would marginalize them -- politically, socially, economically -- as dangerous to the safety of the world. That we should do so at the urging of a man of such spotted relations with the truth should make us pause and consider what science is before we call what he is pushing by that name.

Science is both process and product. The product of science is the "settled science," the Existing Model, found in textbooks and so on, which we think we know at any given time. It is always changing. It changes constantly because the process of science does not stand still. The process of science is detailed in the Scientific Method, which is a way of testing data. New data are emerging all the time, but even old data can be re-interpreted. If enough people find enough problems with the Existing Model (product), and especially if their new theories answer more questions than the Existing Model answered, then the Model will change.

To be sure, some questions have been asked and answered so many times that we call them Laws or Corollaries to the Laws. But over time, even the most settled of questions can be answered in new ways. In my own lifetime, the question of modern humans mating with Neanderthals has been answered No, Yes, No, and now Yes again. Over the same period, questions about the size and structure of our galaxy have led to repeated reconsiderations of the Existing Model.

The process is always valid, if followed correctly, but the product is always only provisionally true. Arguments over conclusions (competing models/products) have to be argued out in terms of the process. If someone is found reasoning in a faulty manner or if one's results are not repeatable, then that product is not to be accepted. Note that this is still, after a manner of speaking, a matter of "you pays your money and you takes your choice." Juries (and voters) are notoriously capable of not following the evidence. In a court of law, the defense need not prove its case; it need only provide "reasonable doubt" to be found not guilty. And, of course, you can always lie with statistics; if voters actually understood economics, for instance, the long history of the Democratic Party would be at an end. In the groves of Academe, in the sacred labs were Research is conducted, they are supposed to be above all that, but nevertheless, spite and ignorance and downright bribery are not unknown, and in our litigious society, the temptation to play lawyer and create your own reality by framing the argument a certain way creeps in.

And all this process depends upon data. To be useful, data must be obtained in a valid manner; thereafter, it may be used by any reasoner to attempt to answer any question. (N.B. "Any reasoner" means we judge the validity of questions and the process of answering them according to the same standards, not according to the credentials displayed or claimed by the parties in the dispute.) Questions about the quality of data are always reasonable, and no amount of bluster is to be accepted in lieu of hard answers about how the data have been obtained and how they have been handled.

In terms of the ongoing arguments about Global Warming -- which became Anthropogenic Global Warming, then Climate Change -- we're not just arguing about the product, though arguing about the product is legitimate and reasonable, whatever Al Gore & Co. say. So long as arguments are made in free and open debate, using process and data that all can examine, let them go on.

But wait. Those who want to shut down the argument by slinging accusations of "denier" against the other side seem singularly unwilling to actually argue the process by which they came up with their product. Not only that, but serious evidence exists that some of those engaged in Big Science have actually falsified data, data upon which everybody depends for asking and answering these important questions. If that is true, then these people are not "deniers" of science but defilers of science. They ought to be excommunicated from the scientific community and never listened to again. They ought to lose their jobs and pensions and go beggared into the academic and government wilderness. For ever. They have committed the one unpardonable sin known to science, tainting not only their own work but that of all the other scientists working in the same field.

I used the term Big Science just now. Sad to say, the work of science depends a lot on funding, and who funds you can cause many a researcher to skew his argument (the process) a certain way. Still, the process of putting the best face you can on your data (the product) is always liable to be shot down by those who are not so tempted. But to falsify your data is the equivalent of tampering with the evidence. It voids every part of your process and your product, rendering both, in legal jargon, "fruit of the poisonous tree."

I don't know whether the earth is warming, cooling, or just going up and down. I read all the stuff, I listen to all the arguments. I care very much about getting this right. But this I know: Al Gore is a phony and a snake oil salesman, who wouldn't know a valid argument if it bit him in his pampered posterior. All he and some of these other guys want is power, and they think they can scare people into giving it to them. And if the data aren't scary enough, why then, they'll make them scarier. Shame on them, the defilers of science. 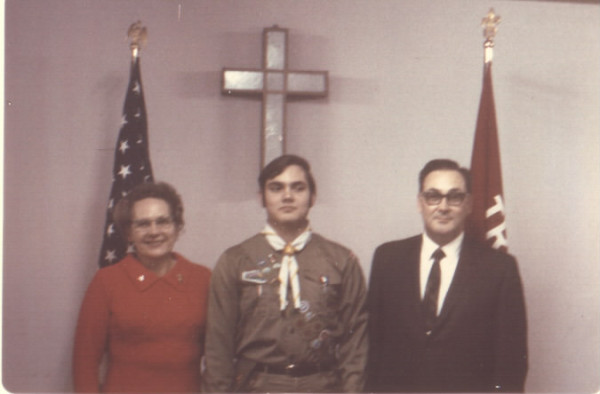 An old pic, from a time that is forgot, showing Your Beloved Correspondent between his proud parents on the occasion of his Eagle Court of Honor, Fall, 1970.
Collapse