. . . and as for those who want to "do something" about it, well, we all know how the "warmers" have excommunicated the "deniers" from something they call Science, but which looks a lot more like a doomsday cult run by professional cons. Which doesn't mean that the climate isn't changing; it just means that the real science is still being done.

So, let's take a look at some real science. Here's a chart similar to one a friend of mine posted a while back in a slam against the "deniers." It shows that Arctic sea ice has declined by some 615,000 square km since 1979. That's worrisome. 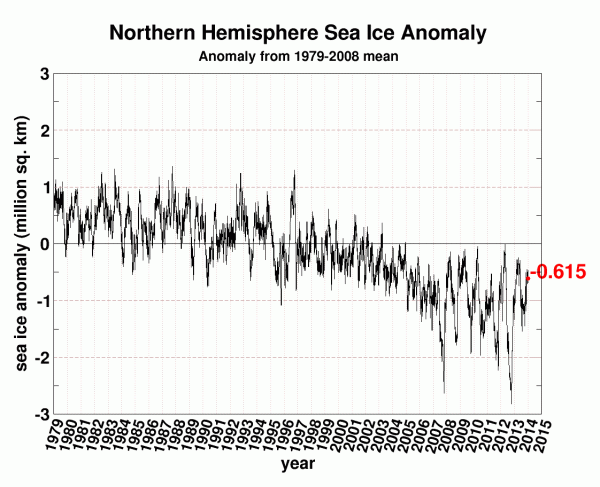 But here's another chart showing that Antarctic sea ice has increased by 1,438,000 square km over the same time! What about that? 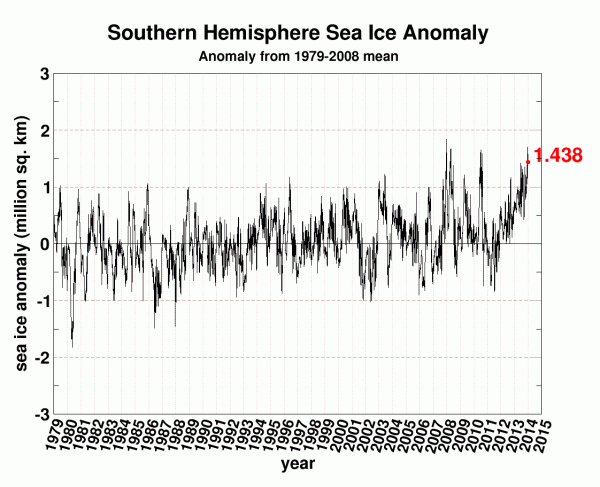 The net result is pretty much a wash. There's at least as much sea ice around now as thirty years ago, as this graph shows.

So, is the climate changing? Yes, but we don't know how radically, or in which direction (long-term), and anyone who tells you different is selling you something. What we do know is that the nostrums pushed by the warmers tend to be heavy-handed, politically and economically. We also know that they won't work, partly because they're such piddly things (wind farms and such) and partly because they deliberately let the biggest polluters on the planet skate on conforming to their strictures because of their "developing" economies.

So, given the warming assumption, what might work? That is, what might ameliorate the effects of global warming? I was talking about this the other day with a friend. I said, You know, nobody's talking about habitat loss any more, or about desertification. These are real problems in sub-Saharan Africa, especially in the sub-tropical arid belt we call the Sahel. Over the last millenium or so, expanding populations have chopped down too many trees for cooking fuel and other needs, which has turned lush greenbelts -- North Africa used to produce enormous quantities of grain in Roman times -- into parched deserts and semi-deserts. Without trees, the water table recedes and the soil blows away. Even the rainfall is less; you see, forests (big ones, anyway) create their own weather. Trees also remove carbon from the atmosphere, since plants take in CO2 and put out oxygen. So, obviously, if you could reforest much of sub-Sarahan Africa, you would, eventually, increase rainfall, improve the soil, raise the water table, and ameliorate those nasty ol' greenhouse gases.

Now, remember, the peoples of sub-Saharan Africa didn't set out to impoverish themselves. It's just that the trees were -- well, just there. They didn't belong to anybody, they were free for the taking. So, they took them, without thinking about the long term. Any project to reforest arid lands that doesn't account for the tendency of poor people to scrounge whatever they can is doomed to failure. A smart approach would be to start the reforestation by planting orchard crops -- nut trees and fruit trees that people could actually own, which they would protect and which would improve their lives economically. Lead with entrepreneurial assistance, follow up with government-to-government assistance with forest preserves (non-orchard trees).

Now, maybe a long-term plan for entrepreneurial reforestation wouldn't stop the Global Warming Apocalypse from coming. But maybe it would. Or maybe it would make it not quite as bad. Someone would have to do some actual science to find out. But at least while we were trying to do something about a possible problem, we would be making many poor people's lives better, instead of writing oppressive rules that make the rest of us less free, burdening us with taxes that make us poorer, cluttering our landscape with stupid, bird-chomping wind turbines, and investing public money in crony-capitalist scams they call "green industries." And if there is no Global Warming Apocalypse? Well, then, we've still done something helpful about desertification and habitat loss (two problems that we know are problems).

So, to recap. I've got an open mind. I want to know what the science actually IS. And I've been a conservationist my entire life. I've preached on the Christian duty to be good stewards of the earth my whole career. But when Al Gore & co. say, "the Science is settled!" and demand that we put all our money and rights in their Evil-Be-Gone Box, I say Nuts. And when many of those publishing what are supposed to be purely scientific studies fudge their own data in order to tart up their conclusions, they are acting as advocates, not scientists (and dishonest ones, at that).

In C.S. Lewis's great novel, That Hideous Strength, Mark Studdock is seduced into joining the National Institute for Coordinated Experiments (N.I.C.E.), a think tank that under the cover of "science" gives free rein to a bunch of nutjobs and fascist types. With unlimited government money and no public accountability, they run riot. Mark is warned by a prominent scientist, Bill Hingest, to get out. He's the real deal, and in their beginning, the N.I.C.E. used him as the poster child of what they were promising to accomplish for the country. But he's getting ready to leave. When Mark asks him why, he replies, He thought the N.I.C.E. was supposed to be about science. Of course, to the real scientist, all the propaganda and control stuff is not what he's looking for. (Hingest doesn't get far. He's murdered by N.I.C.E. thugs.)

It's supposed to be about science. Those who shout "Science!" seem more interested in advancing a cause than in finding an answer, which isn't very scientific. And, sure, we have to get beyond investigation and propose courses of action, I know. But insofar as we have to talk about prescriptions as well as diagnoses, well, I'm in favor of those prescriptions which maximize human dignity and human empowerment, and which might actually do some good. I see precious little of any of that in the fascistic programme favored by the warming cult. 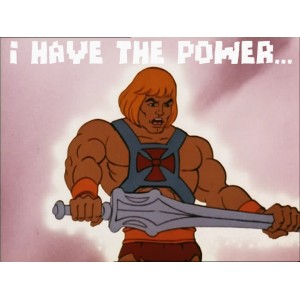