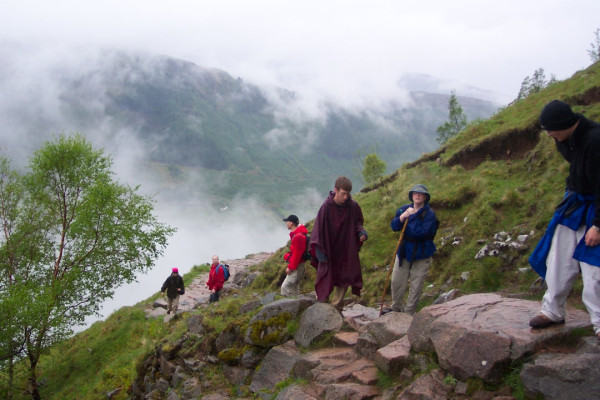 I have written before on what I call the English Church tradition. It is a spiritual lineage that shapes us in many ways, whatever our religious affiliation, because it was a major force in shaping American society. For those of us whose religious affiliation is directly part of the lineage, it shapes us every Sunday in church.

I keep running into United Methodists who (like many people these days) don't know their own history, and who think that all kinds of alien traditions or modern political movements are intensely "Wesleyan." John Wesley would simply boggle at that. Wesley's own attitude toward the Christian past is complicated, but he was well-versed in it as we too often are not.

Christianity came to Britain as it came to other places, along the trade routes of the Roman Empire and carried in legionary backpacks. That said, the British Church of the late empire planted few seeds that would last through the Anglo-Saxon invasion of Britain in the fifth century. Christianity lingered on in what became Wales, it flourished in Ireland, but in Angelcynn and in Pictland, paganism was the norm.

Christianity re-entered England by two routes. The first was sent by Pope Gregory the Great to Kent. It was a planned missionary effort, designed to convert all the kingdoms of the Angles, Saxons, and Jutes. It was well supported. And it bore fruit, however slowly. The English Church it founded was and remained highly connected to the larger Western Church. In days to come, the English Church would take the lead in sending missions to the Continent to convert their Frisian cousins, then the Germans.

Meanwhile, there was an expansion of Irish missions from Iona outwards. The Scots (= Irish) were invading and settling the western isles and coasts of the north as the Anglo-Saxons had done the southern and eastern parts of Britain. St. Columba's founding of a monastery on Iona was thus both "in exile" and "among kin." A chain of daughter houses spread across what is now Scotland and entered Northumbria. There were conflicts among the Celtic and Roman church leaders. These tensions were eventually resolved and under brilliant leaders like Cuthbert of Lindisfarne and Wilfrid of Ripon, a dynamic Church proceeded to convert the pagans, minister to the faithful, build churches, and develop a particular spiritual idiom. The greatest scholar of the age was a Northumbrian monk named Bede. Later, a Northumbrian deacon named Alcuin would lead the revival of education under Charlemagne.

The English Church was a church of the English language. Experiments with Scripture and worship in the vernacular occurred very early. Some of the same turns of phrase we use in our worship today go all the way back to Old English turns of phrase. The Book of Common Prayer and the King James Bible are not merely Renaissance achievements: they are built upon a solid foundation. Our spirits are shaped by words that communicate the Word of God; and our words are very English. Even groups we think of as different from each other -- Anglicans, Methodists, Puritans, Baptists -- have similar passages in their liturgies which all come from the same source.

The English Church was a church of lay piety and of eager monasticism. Methodism has been called "monasticism for the masses." Spiritual disciplines, union with God, holiness, you can find Wesley's antecedents in Sawles Warde and many other Middle English texts. Wesley himself did not feel he was inventing much that was new. He felt he was going back to the fountainhead of his faith and his Church.

The English Church was aware of itself in continuity with its past. Wesley was very proud of the English Church, which he repeatedly described as the "best reformed" of all the Churches. He did not see the Reformation as a break with the past, as Calvin did and most of the Lutherans (other than Luther). Calvin was eager to break with the past and start over with a blank sheet of paper. Luther would have liked to reform the Church as it stood, but faced with the intransigence of the papacy (which overruled its own bishops in the field at times, who were looking for common ground), he turned to the German rulers as Notbischofe, "emergency bishops" who could do what the hierarchy of the existing Church refused to do. But the Church of England, in however preposterous a fashion through the monarchy's and Parliament's meddling, entered the Reformed fold as a unit, its hierarchy intact. The Anglicans, including the later Wesleys, did not see the Reformation as starting over; they saw themselves cleaning house and getting back to their roots.