We have a peach tree in our back yard. It was kind of an accident that it grew up there. And we were planning on transplanting it to Wilderstead. But we kinda got busy. So there it is, and this year, it decided to go crazy producing peaches. So yesterday I picked a half bucketful of them. Deanne has canned most of them. 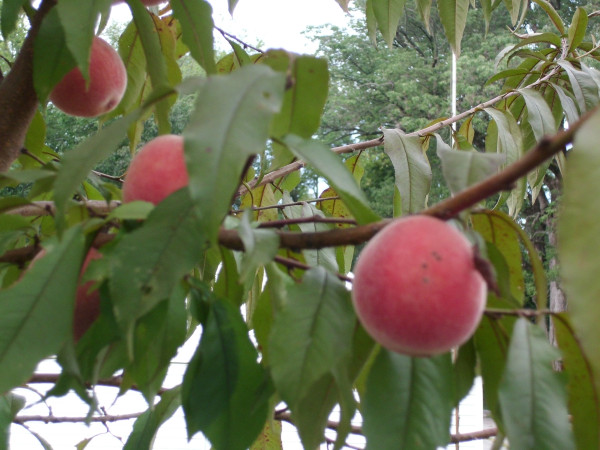 I crammed all I could into the week and by yesterday afternoon was desperate to get out of town for a break. So I got in the car and tootled down the road. Stopped in Brownstown to have supper with an old friend. He was making Irish stew. I asked if it had lamb or beef in it. "We don't eat meat!" he said. Oh, yeah, I forgot. Very good, though.

Made it over to the cabin before dark. Relaxed. Finished one book and started another. Got a lot of sleep (though with weird dreams). This morning, I decided to do just a couple hours' work on the hillside and lower retaining wall. I cut two tranches off the hillside -- maybe a foot -- and used the dirt to backfill down below. Then I laid some block. The retaining wall is almost done, though it and the path it encloses need more dirt. Just gotta wait until the vegetation dies out so I can see to set the lower end.

As for the hillside, I've got about 16 feet width to cut down. At two feet per full day of solo work, it will take me eight mortal days (at 2-4 per month) to gnaw down this dirt. On the other hand, eight guys with spades and barrows could clear it in a day; four guys could do it in two. So, that's what I need to wish for for next month's birthday: a squad of underemployed dwarves looking for some way to fill their time.

On a different topic, I was walking in the woods (not at Wilderstead) when nature decided to call urgently. I found myself saying aloud, "I wish I'd broughten a trowel." Broughten? Where'd that come from? I guess I was working by analogy with "boughten," which survives in old-fashioned dialect as a participle (e.g., "boughten bread," as opposed to the "home-baked" product). "Broughten" is a possible form (just), but I don't know anybody who'd use it. But then, this isn't the first anachronistic neologism I've coined. You're reading the work of somebody who once used "praught" as the past tense of "preach" because "preached" didn't sound right. (Teach/taught, preach/praught, right?)

Tomorrow, we go hiking in the Deam Wilderness. And Sunday's coming. Always one more thing to prepare for.

How does he keep rolling those 20s?
Collapse