I took advantage of a clear weekend on the ol' schedule to go over to Wilderstead early. Got there just as the sun was going down Thursday. I was greeted by a whitetail and a bunny. The bunny kept reappearing in front of the cabin, so it must be denning nearby; the whitetail did not make another appearance during my stay.

I spent a nice, quiet evening in the cabin. Got a great night's sleep. Next morning, I took my time getting after the work to be done. I came out here to dig. It's slow, aggravating work. If I could afford a digging machine, I'd have this done by now, but since it's just me and my personal earth-moving equipment (spade, pick, shovel, McLeod, barrow), I just have to keep at it. I did several hours of excavation on the hillside where I am siting my future cottage, hauling the tailings down to the lower retaining wall to backfill it. When I got tired of digging, I hauled block and built up the wall. Finally, when I could barely move anymore, I knocked off.

After getting cleaned up, I went into town for supper and to buy some drinking water. I was way, way tired. I went to Arby's and stood patiently in line while the manager had computer problems. He was nice enough to call over a young man to take my order on the other register. I began my order, "I'll have a max roast beef, a..." Is this for here? the cashier interrupted. "Yes, I'll have a max roast beef, a plain..." May I have your name? he interrupted again. I was tired and frazzled and I don't like the faux-friendly ways of so many banks and restaurants these days, so I just said, "No." They were nonplussed. Instead of the young man shrugging and taking my order, the manager took over, saying that they ask for people's names in order to keep track of their orders. I looked him right in the eye and said, very distinctly, "NO. I want a MAX roast beef, a PLAIN baked potato, and a small drink." They decided not to tangle with me. I got my food, ate my supper, and returned to my nice, quiet holler.

Had a fitful night. I kept writing sermons in my head instead of sleeping. Still, I awoke early and was fairly fresh. I took some painkillers with breakfast and read for a while. I was debating just packing up and heading home. But the day was lovely and the sun wouldn't be high and hot for two or three hours, so I decided to just work the morning and then go home. So I dug some more and laid some more block. I'm beat to a frappe, but I have a good sense of accomplishment now.

As I was leaving, I was trying to remember when we bought this place. It was at the beginning of February, as I recall, but I can't fix the year in my head. It was at least 2004. We had the cabin built that year. We also backpacked through in March and stayed one very cold night on the other side of the creek. But I don't know if we actually bought the land in 2004 or 2003. Anyway, it's amazing how long we've had it. I really need to start using it for more pleasure than just as a never-ending development project.

The flow of the Pishon is stilled, but there is still a deep pool with sufficient clear water to bathe in. This year, it is filled with little fish -- the first time we've seen that. I don't know what they eat: bugs, or perhaps each other. I know that if you're not careful, they'll nibble your tender parts, so you have to watch what you're doing when you clean yourself up! None of them are big enough to eat, but they'd make some good bait. Gnawing away at the hillside
I dug out all this to the left of the shovel in the pic. 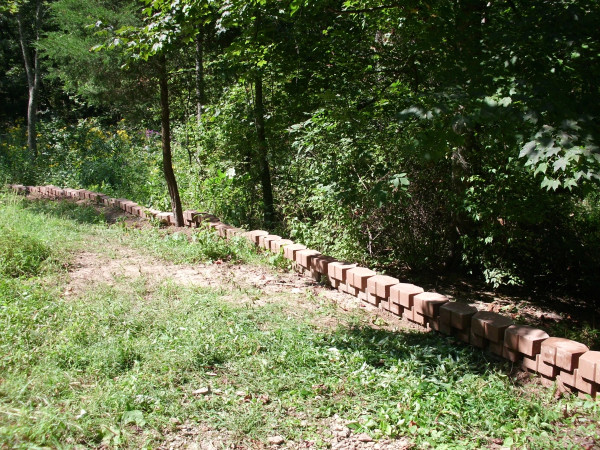 Lower Retaining Wall
In all, I laid a whole pallet's worth of block on this wall.
Collapse