Having been a very good boy and ground out a bunch of paperwork today, I decided to reward myself with a quick trip to the Owen-Putnam State Forest for a short hike. I only needed 2.5 miles to reach my current goal of 1,500 lifetime hiking miles. So, I toodled out to Rattlesnake Campground, planned out a short down-and-back route covering 2.5 miles, and took off with my camera and a liter water bottle. 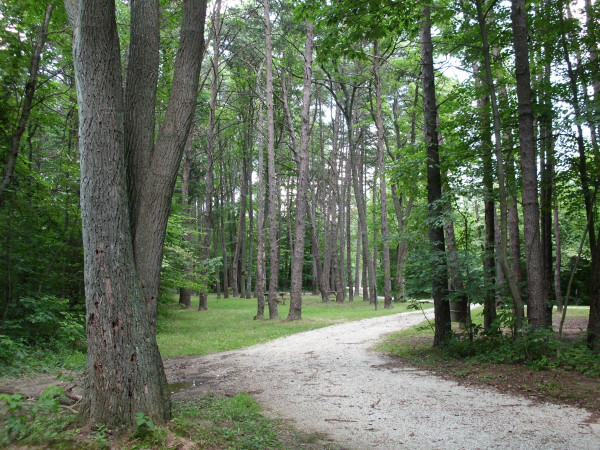 Rattlesnake basking in the sun
Quit freaking out; there is no snake in the picture.

I'd never hiked the trails around Rattlesnake before, just the back roads down to the horse camp and the main campground. But, I figured, how hard could it be? I've got a map (of sorts), published by the State Forest. I've got water. I know what I'm doing. And for the first couple of miles, everything went great. I recognized every turning and was satisfied that I was right where I was supposed to be. I was also making great time, despite following a horse trail. (Horses really tear up a trail, and walking over where they've churned up the ground will tire your legs out pretty quickly.)

Of course, the problem with hiking in the Southern Indiana hills is that you have no horizon, and everywhere looks pretty much the same. Galadhremmin ennorath, as the Elves would say. That's "tree-tanged Middle-earth" for those of you not up on your Sindarin. 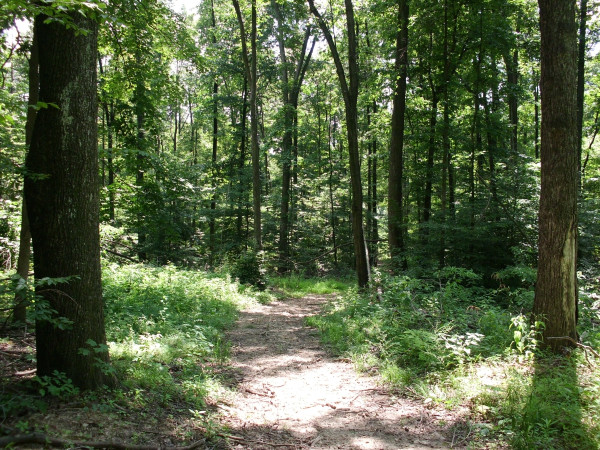 It all looks like this
At least there were plenty of trail markers.

I was looking for the right-hand turn that would take me back to the campground via a southwest approach, but I never found it. I kept walking and walking, but I wasn't getting closer to the campground. In fact, I seemed to be trending west, which was a bit problematic. I was afraid that I would pass the campground on the west and wind up way out of my targeted area. Flutterby
These guys were about all the wildlife I saw.

The trail braided a lot more than I had counted on (or the map showed). That's not a big deal when you're riding a horse, but when you've got only your two feet to get you back to your truck, that's a bit worrisome.

One trail crossed a stream and ended at the top of the bank, where I found -- to my shock -- a grave. I rested for a moment and said a prayer. This grave can't get too many visitors, so I figured I had to stand in for everyone who might have wanted to know where this one was. 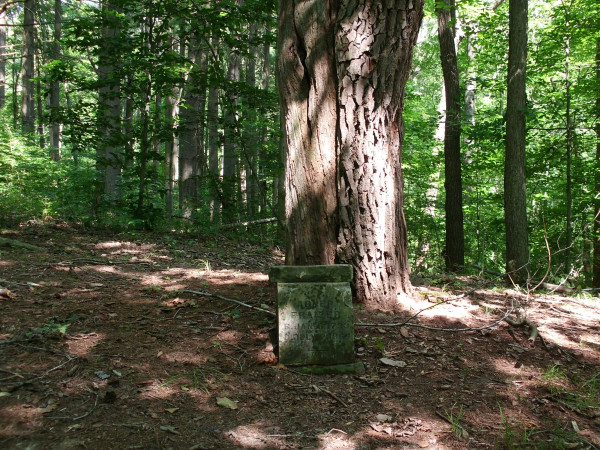 Rest in Peace
God knows where every one of his children is.

I trudged on. Eventually, I realized that I was good and lost. About that time, my cell phone rang. Deanne checking in on me, I thought, but no: it was a guy who rents carnival stuff returning my call regarding the Back-to-School Block Party the Venturers are planning. So there I was, walking briskly down the forest trail, with no real comprehension of where I was, talking about bouncy houses and dunk tanks. It was surreal.

After I got off the phone with him, I decided I'd better call Deanne and tell her where I was and that I would be late getting back. And then I discovered that my phone could get no service to call out. I could only receive calls. That was disturbing.

The first rule of lostness is Don't panic! I'm an experienced hiker. I took stock of my situation and my resources. I had a cell phone (mixed blessing). I had water (maybe a third of a liter left). If I walked steadily in any direction, I would be out of the woods within an hour at most; doing that, there was a possibility I would wind up on the west side of the State land when I needed to be on the east side, which would make it a real schlep to get back, but still, I've walked longer and harder trails. I wasn't in bad shape.

On the other hand, I had broken the first and second rules of hiking: nobody knew where I was, and I had gone alone. I also had no food with me, and it was getting on for suppertime. Still, I felt fairly confident that I'd be out of the woods before too long.

Eventually, I stumbled on a stream. Not a little trickle like I'd traced on the south side of the woods; this was a swiftly flowing creek, and it was full. I looked at my map and immediately placed myself. I was on the far north side of the State property. I had walked completely past Rattlesnake on the west side and gone almost to the limits of the State Forest to the north. I had done about 3.5 miles by this point, and I had about two miles to go to get back. 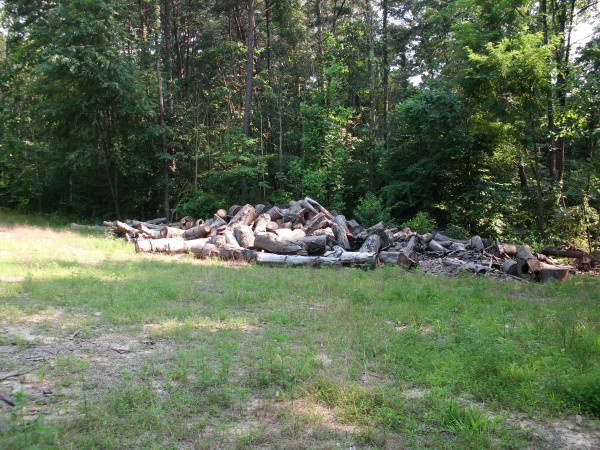 How much wood would a woodchuck chuck
'Bout that much

Walking uphill from the creek, I topped a ridge and struck a clearing with a giant woodpile in it. There was gravel underneath my feet. I was on a logging road. I hastened on, my path plain before me. Trail signs showed where the trail I was following branched off to right and left, but I ignored them. I knew that a logging road had to meet the main Forest road somewhere, and as soon as I hit that, I'd know exactly how far I was from my truck. Plus, I didn't trust all the little side trails that were well-marked on the ground, but not shown on my map. I wanted to get out of the woods!

Soon, I struck the main Forest road. Everything clicked for me. I even knew which of those trail branches I could have followed at the last offering if I'd cared to keep rambling in the woods. I turned west and walked toward the campground. Within two hundred yards, I was at my truck. I had done 5.5 miles or so in just two and a half hours, which is pretty remarkable time, all things considered.

I stopped on the way home to snap this picture. If you'll allow me to shift allusions to a different fantasy world, it was hot as Athas out there, but I remain uneaten by the feral halflings of the Forest Ridge. And, hey, it's good to be home.

Oh, yeah: My lifetime hiking mileage is now estimated to be 1,503 miles! Yay! for me! Beware of Feral Halflings
Ha, ha, didn't get me!
Collapse