Well, I'm pleased to read that Mitt Romney whomped on Barack Obama last night. Even the foreign press says as much. Whether that moves the poll numbers, I don't know.

As for me, I didn't watch. I've been a politics and news junkie my entire life, but I just can't mainline the stuff any more. If I pay too close attention, I get either depressed or angry, and neither is a good state to be in.

It was a small service. Humans and animals made a nice congregation, and both behaved well.
: ) 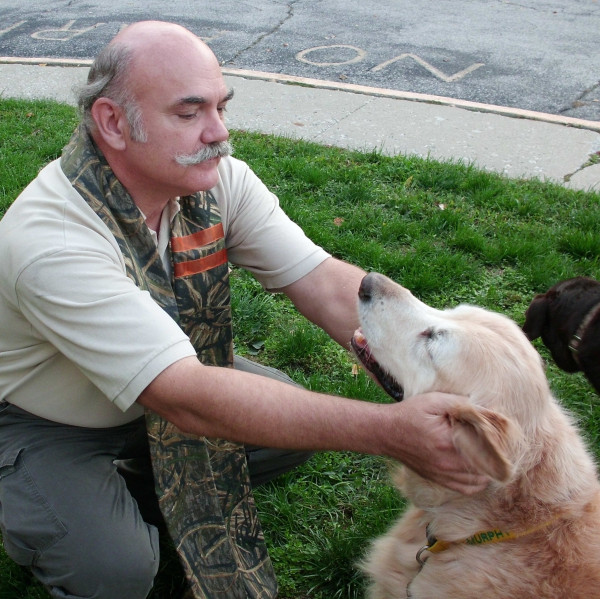 Here I am blessing Murphy, an 11-year-old golden retriever.

Let us suppose a local newspaper publishes a story on a historic inn nearby. The story states, “The sign in the Old Rogue’s window proudly proclaims, ‘George Washington slept here."

Now, all that the story SAYS is that there is a card in the window of that inn that says that. You can go check it out, and you find that it is true, that is, accurate. But did George Washington actually sleep there? The story in the newspaper can be true without the claims of the Old Rogue Inn being true. To determine that, you would have to examine other evidence, including historical accounts of Washington’s movements throughout the time he might have visited this locale.

Let’s suppose that after further investigation, you discover that the Old Rogue’s claims are accurate. George Washington did, in fact, sleep there on (month) (date), (year). He may have stopped for the night or just fallen asleep in the bar, but that’s as may be. The story is true, the placard therefore also true.

Concerning the Bible, we can decide that it is reliable in what it affirms. We can even go beyond the evidence and say that it has shown itself to be so reliable that we believe that God himself has guided its preservation and collection in order to lead us to the (absolute) truth. But the Bible, as a book that sits on a shelf with other books, that says many things, cannot be the absolute truth, even if it is proved accurate every time we investigate one of its claims.

Consider this example: Luke says that Jesus was born when Quirinius was governor of Syria, whereas Matthew said Jesus was born when Herod the Great was king of the Jews. Checking what we know of the historical sources, we find that Herod died before Quirinius became governor of Syria. Is one of the gospel writers, then, in error? If so, the Bible is not even true simpliciter, let alone absolutely true.

On the other hand, Quirinius, it seems, was legate (deputy) to the governor of Syria (Quintus Varus, if memory serves) at the time Herod died. He might have been in charge of the census down in Judea and Galilee. He certainly became governor of Syria later. He would be remembered as “governor” and as a “deputy governor” at the time of the census, so maybe that’s what people who remembered the census called him when Luke (the Gentile from Asia Province) came researching his gospel.

So, it is the ABSOLUTE truth that X was king of the Jews and Y was governor of Syria when Jesus was born. The gospels are WITNESSES to that absolute truth; they are not the absolute truth, even if accurate. And since they are filtered through the personalities, memories, and research of the two writers, each is only CONTINGENTLY true, though we may come to believe that each is reliable – so far as he goes.

Meanwhile, over in John’s gospel, HE says, “These things are written that you may believe that Jesus is the Christ, the Son of God, and that believing you may have life in his name.” In the last chapter, he also says, “But there are also many other things which Jesus did; were every one of them to be written, I suppose that the world itself could not contain the books that would be written.” Indeed. What Jesus did constitutes the absolute truth. The gospel accounts are witnesses to that absolute truth, which cannot be stated in full. They are reliable, but contingent. They are only true so long as we understand them as their authors intended them, and keeping in mind all the things they left out and all the differences in our cultures.

All of which means that we cannot do, as many evangelicals do, and laboriously set out to “prove” the Bible true, and then turn around and say, “The Bible says,” as if we’d played a trump card that settles the argument.
Collapse