I had to go to the other side of Cincinnati for a wedding rehearsal Thursday afternoon, then back Saturday for the wedding, so I decided to stay two nights at Wilderstead. That meant I had all day Friday to work on my building site.

I moved about one and a quarter cubic yards of hillside, which finished backfilling and leveling the terrace I will eventually build on; however, I still have about half the hillside yet to carve down, plus excavating the footers. With that in mind, I went in town and bought a bunch of block, along with the capstones I use for the foundation. And with that, I began the lower retaining wall. I will eventually have a sloping, terraced roadway leading from the drive up the holler, going past the front of the house.

I quit work about 4:30 p.m., and took a few pictures of the holler. It was a beautiful day; the air was fresh and moist with the feeling of rain coming on. 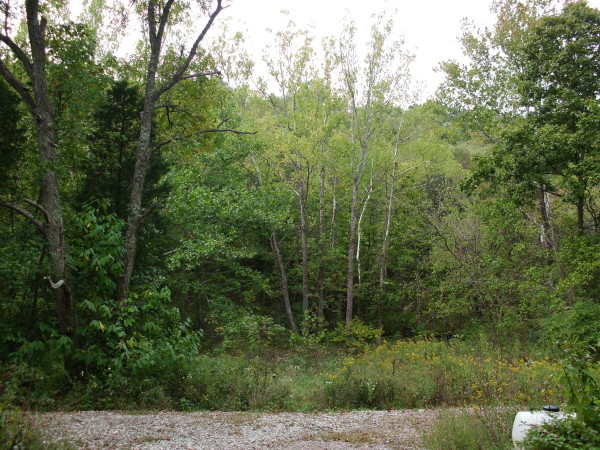 Start of the lower retaining wall.

Listening to my progressive friends and acquaintances rave about "greedy corporations" and "the 1-percent," I am simply mystified. Why are rich business people supposed to be evil? How many corporate leaders can stack up to the top-paid celebrities in 2012? Forbes lists that bunch as follows.

Are you going to tell me that Sacha Baron Cohen adds more to our national well-being than, say, the CEO of a department store chain? The celebs act like corporate chieftains, too, in that they employ people -- managers, financial planners, personal assistants. Recording/performing artists (the list, above, is only the top-paid movie stars of this year) employ stage crews, etc. So, they're bosses, too, and probably not better to work for than any other boss.

If we're talking not annual income but total assets, Stephen Spielberg is worth $3 billion, according to Forbes. He's as much a corporate honcho as the chairman of Archer Daniels Midland. For that matter, Oprah Winfrey is worth $2.7 billion, which makes most of the top movie celebs look like pikers.

Are Hollywood rich folk better role models than corporate rich folk? Are they nicer to their pets? Do they spend their money more wisely? Do they love their country more? No. The only real difference is that most of them affirm the liberal/progressive shibboleths. So that makes their obscene wealth okay, right?

Class warfare isn't about raising the poor, it's about punishing the rich. Oh, yeah -- and about securing the power and perks of the self-appointed tribunes of the people who go about saying which rich people are heroes and which are bums.
Collapse