I toodled over to Wilderstead yesterday, laid some block, and then got down to some serious digging. Did some more this morning. Here is a shot of my work-in-progress as I continue to level the snout of the hill on which our future cottage will rest. 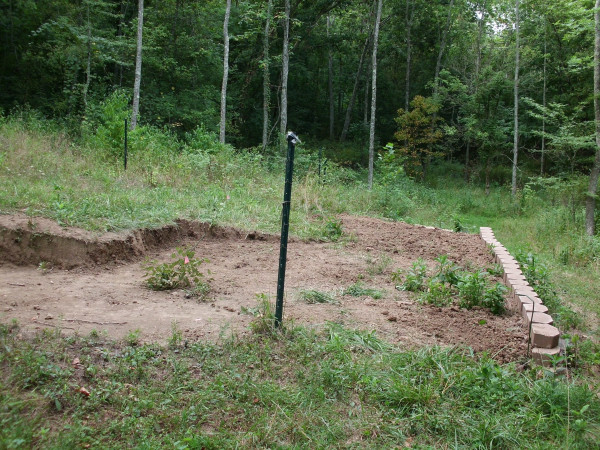 The Boy Scouts of America has convened a group to examine the Venturing program. One of the recommendations that has been made to this group is that the Venturing oath, etc., should be replaced with the Scout oath, etc. They are currently taking input on this and other things.

One of the things that I have learned long since is that BSA is not a democracy. It is a corporation. It is highly protective of its brand and its identity (especially since it had to fend off a couple of well-funded competitors back in the day, including William Randolph Hearst's American Boy Scouts). It will listen, but it will do what it will do. If you want to stay involved, you can do it their way -- or leave. So it has always been.

In most cases, I'd say BSA gets it right, but every now and then, they reach into their Stupid Bag and recycle some old idea that has failed many times before and say, "if we just put a new coat of paint on this thing, it'll work this time!" One of their perennial Bad Ideas is to try to get churches to register their existing youth groups as Venturing Crews (or Explorer Posts back in the day). I've fended this one off I don't know how many times. And no matter how many times I display my experiences and credentials as a pastor, a church growth consultant, a Scout leader, and someone who's actually succeeded at Scouting as Ministry, there's always some hot-shot Scout Executive with zero experience in ministry who tries to tell me that this will be just the thing to revitalize my tired, old church.

Well, the other Bad Idea I keep seeing rise from the dead is making Venturing (formerly Exploring) an "older boy" program. BSA held its first conference on the "older boy problem" back in 1915 or so. Some BSA people are so obsessed with the problem of retaining teen-age boys in Boy Scouting (and seeing them get Eagle), they want to remake everything to reach that goal. It doesn't work.

Older boys drop out of Scouting for many reasons. Girls and cars are two oft-cited reasons, and they have a lot of validity. And there's not a whole lot you can do about either. But I also see a lot of older boys drop out short of their Eagle rank because they just lose interest. Their Troop isn't challenging enough to keep their participation any more.

See, that's why they need Venturing, say the guys with the Older Boy fixation. But who's going to do this Venturing program? The same old, tired guys who failed to deliver an exciting enough Boy Scout program to keep them? Using Venturing as an older boy program (even with girls added) often winds up being an add-on to the Troop, and not very challenging to boot. I see a lot of Crews that started with excitement, but with the same old leaders they just sit around and look stunningly cool in their forest green shirts. And after a while, that's just not enough. So they drop out anyway, or just piddle, and it doesn't keep them on the road to Eagle.

Venturing is not just Boy Scouting in a forest green shirt. Venturing is different. The approach is different. We don't spend huge amounts of time on acculturation issues, like we do with 11-12 year old Boy Scouts. We learn our values by living them on the trail or the water or in ministry to others. And how we do things is different. I just got back from a Philmont trek with our crew. We had a sister crew formed from a Tennessee Boy Scout Troop. We did the same itinerary, but we had very different approaches to backpacking. They were all about making time, getting there (shoot the stragglers!); we took our time and waited on people. I'm sure there are some gung-ho co-ed backpackers, but the groups I've seen that are truly co-ed (not just Boy Scouts with a few girls tacked on) relate to each other differently, approach problems differently.

And the target audience for Venturing is different, too. We attract mostly girls (obviously) and NON-SCOUT boys. We get boys who were never in Scouts at all, or maybe just for a year or two of Cubs. A few of our guys are multiple-registered in both Troop and Crew, but they're a minority, and always have been -- the guys who just can't get enough, you could call them. But they adapt to OUR ways; we don't try to make our program Scout Troop Redux. They already have an excellent Scout Troop to belong to, if they want. We're providing something different.

As BSA evaluates what they've got in Venturing, they should be aware of this. And they should handle the Venturing program with care, since we're the part of their organization that has the most growth potential. My message to them is, please don't saddle us with the older boy shtick. If you want to keep older boys in Boy Scouts, concentrate on improving Troop program; just remember, though -- that's not the program we're doing.

Back when I was finishing up seminary -- late 1970s, that is -- I came up with a profound thought (I have one at least every decade or so). I was reading a lot of Church history at the time, and my special treat was to read about the evangelization of Northern Europe during the so-called "Dark Ages" -- an especially neglected era in our studies.

The second half millennium of the Church was a time of great success for Christianity, though one might not have predicted it at the beginning of that period. Christianity had gotten very comfortable in the Roman Empire (East and West). The Faith had adapted itself to cultural norms that had once been alien to it and succeeded greatly. Now, however, all the assumptions of the Empire, and of the milieu in which the Church was born, were coming under attack. In the 400s, the Western Empire lost over half its territory to new peoples crowding in, pagan peoples with different social and legal systems. Two centuries later, Islam arose to begin challenging Christianity for dominance over the Mediterranean world.

The achievement of that time -- particularly in the West -- was the transmission of the Christian faith to a new civilization. The best of the old Imperial modes and mores were retained to a degree, but the Church successfully interpenetrated and won over whole new peoples. The evangelization of the English is the case study of the period and shows the missionary Church at its finest. The period of expansion culminated in the democratically decided mass conversion of Iceland c. AD 1000.

Tolkien pointed out that the fusion of Mediterranean and Germanic produced the Medieval (Beowulf is the forerunner of the knight errant, in a way). But though Christianity found new forms to express itself in, there was no doubt that it was the ancient Faith that was successfully translated into the languages and thought of the Germanic peoples who had dismembered the old Empire. Not only that, but the Church succeeded in evangelizing peoples who had never before been part of the Roman system.

As I was preparing to graduate, I thought that our time was similar to that time, that AD 1980 was comparable to, say, AD 500 or so. The old civilization that I thought I was going to inherit, the world of my parents and their assumptions, was rapidly passing away. Rising adults and youth no longer understood what made the people of that age tick. It was time for the Church to translate its message into a new form. But it had to be the one, the true, the authentic, message, or it would all be lost. That was what the leadership of the Church at all levels had done back in the early Middle Ages; that was what was so amazing and inspiring. So I have been, all throughout my career, an explainer as much as a preacher. I have desired above all to teach the ancient Faith in words and modes understandable to the barbarians I live among (N.B., for someone like me, "barbarian" is not a derogatory term, merely a descriptive one). And I have had some modest success.

But the Church at large -- especially, The United Methodist Church -- has not seen the task in the same way. Many of our leaders don't believe that it is possible to actually translate ideas from one culture to another; each culture has its own "truth," they think, which makes the attempt impossible, undesirable, or both. Many of our leaders, too, no longer believe the ancient Faith, or fancy that they believe what is still "true" at the core of it while disbelieving the actual, enumerated statements of belief in the Creeds. Others think that the ancient Faith is a fine thing, but they have been dazzled by the new cultural forms in evidence, and that's all they care about. They want to create a Church that reflects the new culture, and think that the content of the Faith taught in it a matter of secondary importance. Until recently, too, the evangelicals I went to seminary among thought that their sub-culture, born and developed between c. 1850 and 1950, had fully captured the ancient Faith and that the Faith could hardly be communicated without their way of expressing it.

I weep over all this. We have, as a Church, just plain missed the boat. We have majored in the minors. We have hared off after second-bests. We have left the treasure we found lying in the field where we discovered it and gone off to bid on other properties. This, this, is the tragedy of our times. All our talk of structure and style and new forms of social networking and the rest of it is just a means of talking about stuff that doesn't really matter while the stuff that really does is ignored. If you don't get the wall plumb, it doesn't matter what the wall is made of, or how you decorate it. Because it won't stand for long.
Collapse