We are now the new owners of a 2007 Prius. The plan is to sell both Deanne's '01 Prizm and my beloved Miranda ('97 Plymouth Breeze with nearly 368,000 miles on it) by the end of the summer. That will consolidate us down to one passenger car getting 50 mgp and one light duty truck. I was thinking seriously about getting a heavier truck, but got talked out of it. The cost of having construction machines delivered to my holler a few times versus the cost of operating a 3/4 ton truck over many years convinced me I needed a better car, not a better truck.

So, here's our new baby. 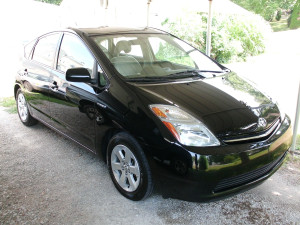 Those of us in the preachin' trade -- at least, those of us Methodist types -- count years from June rather than January, since we all start over after Annual Conference. We are either sent back to the same churches or start in new ones. Since this continues the pattern of childhood and youth of counting in school years, it becomes a lifelong tic. So, as things kick over and the pattern re-asserts itself, let me think back over the last year.

I am returning for my seventh year at EFUMC, for which I am very grateful. Ellettsville is a strong church -- stronger than perhaps they know. These are hard days for the Mainline Church, and also hard days, economically, for everybody. Lots of congregations that once were banner-bearers are now mere shadows of themselves. We here just keep on truckin'. And more than that: we have begun a new upswing, with some new, young families and some births. This last year was the first for me here where I couldn't put together a confirmation class. We're just low on new middle-schoolers. But I've had several baptisms this year of children, as well as some professions of faith by parents. The congregation is interested in missions and its finances are stable. And I feel the support of the congregation, their prayers and their love. It's a good place to be.

If EFUMC is the Good of the past year, then the Bad has obviously been my health. I have been sick one way or another for most of this year. It began with a slide into exhaustion back in October. I dragged myself into Advent, and by Christmas I was taking antibiotics for chronic bronchitis. That turned into pneumonia in January. I was finally starting to feel like something by the end of February, when I was felled with a major gall bladder attack. I had that out in April, and have been recuperating since. Between the two of us, our out-of-pocket medical costs have just about busted our budget. Besides being no fun to be sick, it's depressing. You begin to look at the whole world with a jaundiced eye and give yourself over to grumbling. My goal for this next year is to get healthy and stay healthy.

If EFUMC has been the Good and my health has been the Bad, the Ugly would have to be my feelings of frustration toward some of the major associations in my life. I have 35 years of pension credit as an ordained minister in the Indiana Annual Conference and its predecessor, and if I never attended another session of it, I would be a happier person. Now, there is much good that could be said about our Conference, but I have been so frustrated and beaten up trying to make my contribution amidst the craziness of the merger between the former South and North Conferences that I find myself in need of a break from the whole thing. I have lost perspective, and I risk being consumed by negative feelings. Equally frustrating has been the last year or so as President of the National Association of UM Scouters and the last quadrennium as a director of the General Commission on United Methodist Men. I have been in and around the national level of UM Scouting Ministry for fully twenty years now. I have seen the sausage being made, and I can tell you that I am happy to be stepping down this weekend, as my term expires. I am tired of dealing with the bureaucratic infighting most of all. I wish I had been able to accomplish more, but I know that I've got to get away from this before it drags me down and sucks all the life out of me. So, it's time to go, and let others deal with both the problems and opportunities.

Well, there is more to sizing up the year than recounting the Good, the Bad, and the Ugly of the past. At Philmont, as we sit down to do our evening devotions, we talk about Thorns and Roses: the Bad (or the Ugly) and the Good of the day just past. But we also often mention at least a Bud or two -- a hope for the next day. This next year, I want to spend more time at Wilderstead, making progress with the house or just pottering about. I want to spend more time schmoozing my parishioners and less time going to meetings. I want to get a book or two in the pipeline. I'm hoping that Deanne gets a job in her field and is in a fair way of completing her licensure. I'm hoping that son-in-law Brian finds a job back this way and we get to see more of our daughter's family. I'm planning on going to the Congo on a mission trip. I hope to lose yet more weight and feel better, all the time. And I pray for a revival in my soul, not only for myself, but so I can declare the marvelous works of God to my congregation and lift them up to the heavenly places.
Collapse