This protest sign was displayed at a rally for religious freedom in Naples, Florida. I appreciate the sentiment. 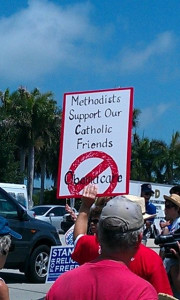 Many years ago, I was serving as an Associate Pastor in a college town church. My senior pastor was one of those guys who came north in the Sixties. He was fashionably liberal in politics and flamboyantly evangelical in style.

We were both in an Education Committee meeting at the church. The committee was going to choose a VBS curriculum for that year. Discussion was polite, but a wee bit strained. There was a constant pull and tussle between the townie, family-oriented evangelical types and the upscale, university-oriented liberal types. Being the only UM church in the town and also highly connected to a UM university, we had both types well represented in the congregation.

There were several curricula to choose among, but two in particular stood out. One was the product of one of the evangelical publishing houses (which, I forget). The other was a mainline product (UM, I suppose, but it's been too long for me to recall). Round and round the discussion went. Nobody wanted to look like they're were arguing. Everybody wanted to get along. Yet it was clear that the evangelical types preferred Curriculum A, and the mainline types, Curriculum B. The senior pastor was trying to look impartial, but it wasn't hard to figure out which side he was rooting for.

Anyway, he lifted up Curriculum A and said that it was really good, but he was not really for it, because "we" stood for A, B, and C. (I have forgotten what he actually said.) Whatever it was that he said, I noticed an inconsistency. I replied that not five minutes ago, he'd said the same thing about Curriculum B, without the negative judgment. "It's the same argument either way, Jerry, theirs or ours" I said. He looked flummoxed for a moment; then he opened his mouth and said, "Yes. But we're right."

Yes. But we're right. It was my turn to be flummoxed. I didn't know what to say. And I don't remember how the issue came out in that particular meeting. What I do know is that I have met this attitude repeatedly over the years. It is typical of liberals/progressives, both religious and political. No matter how often you point out their inconsistencies, no matter how solid a case you build for another point of view, no matter how many of their "facts" that you can debunk, at the end of the argument they will simply turn to you and say, Yes. But we're right.

The Catholic doctrine of "invincible ignorance" is really about something else, but I'd like to borrow the phrase for a moment to describe the essence of Progressive thought. They have defined themselves as right, and they really are not open to any argument that might ever prove them wrong. They don't see themselves as having picked a side in any given controversy; they are simply Right, and the people opposing them have decided to be Wrong. The other side has acted in a divisive way -- for purely partisan or ideological reasons, of course. I mean, we -- we progressives -- are not partisan, merely Right; we do not have an ideology, we have Truth. Of course, our Truth changes from day to day, but it's still Truth. You can tell, because we're for it, and we're right.